A Single Girl’s Guide to Chicago – Where to Stay, What to Do, Where to Eat

In February, I took my first completely solo trip…to Paris. 20/20 hindsight, going to the City of Love completely alone as a first solo adventure {and I mean COMPLETELY alone, no friends, no family, definitely no boyfriend}, was probably not ideal. After all, it’s literally nicknamed for how romantic the city was. The trip ended up being the best one I’ve ever been on, and through it I learned two things: 1. I really freaking love Paris and 2. There’s a desperate need for travel guides specifically designed for single women who want to travel all over the world {aka myself}. As nice as all the travel guides made dining with someone on top of the Eiffel Tower and holding hands through the Tuileries sound, it’s just not my current reality. So today, right here, right now, I’m kicking off my new favorite series here on Eva Darling: “A single girl’s guide to _____.” I’m starting off the series with a city that’s close neighbor of my home state of Minnesota, Chicago.

Chicago may be a major city, but there’s something about it that’s welcoming and friendly like a much smaller town. Overall, it’s definitely a very walkable city, which is exactly how I recommend seeing it. Even if you want to call a car such as Uber or Lyft, it’s much cheaper than in other large cities such as New York City, London, and Paris. My Lyft Line ride was $1.85 and would have been at least $2.75 in NYC. There was something calming about Chicago for me, and I think it’s because between Millenium Park and the River, the city doesn’t feel as if it’s moving super fast like New York does. It’s also not over crowed and packed full of tourists like London or Washington D.C. Is it bad that every time I think of Chicago, I just think of Trina Vega from the Nickelodeon show Victorious screeching out “SHEcago, SHEcago” during Season 1 Episode 5 when she puts on her one-woman show? Probably. Regardless, her lyric modification of “Chicago” is relevant to a single woman taking on Chicago, so it works for the situation. 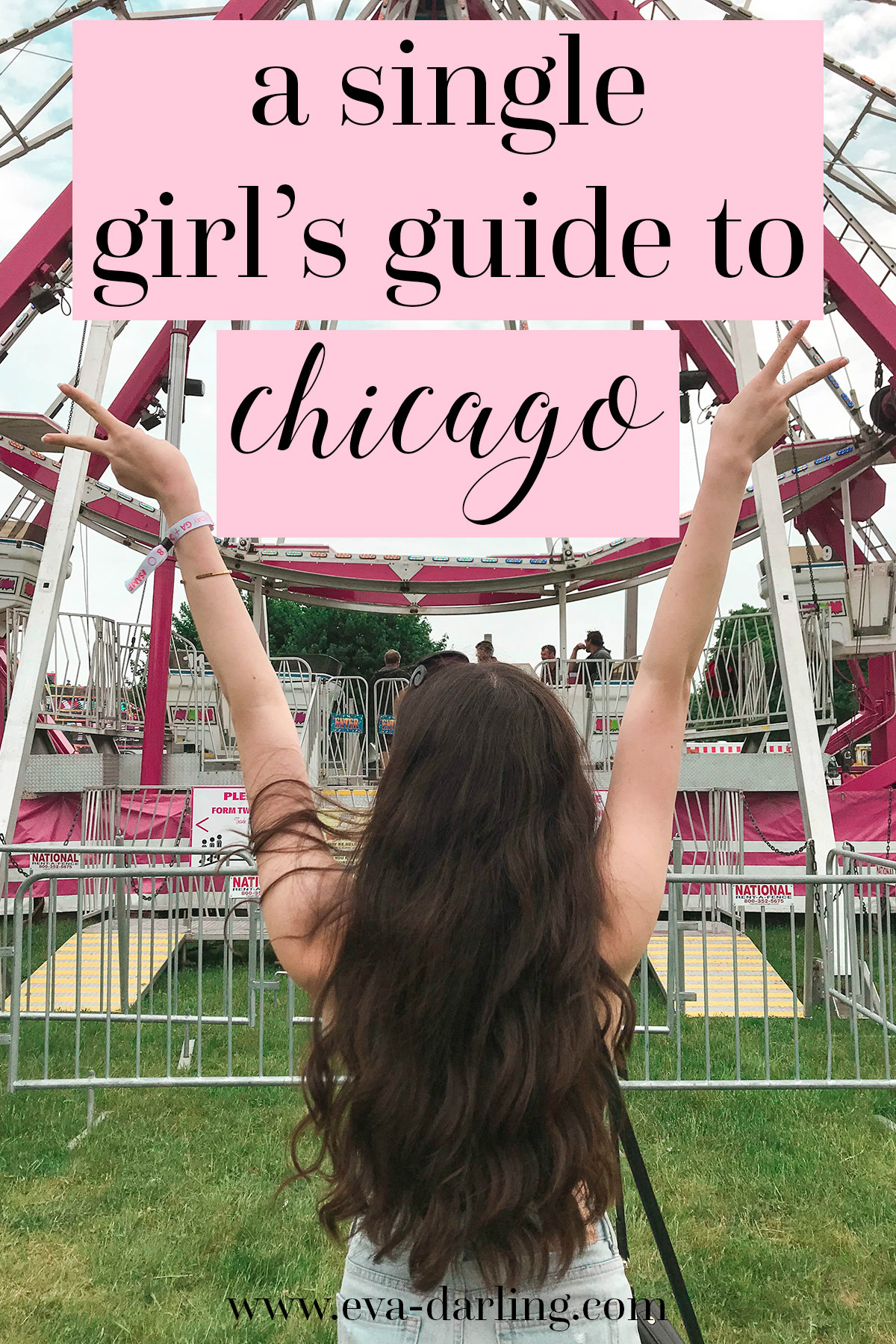 Okay backstory: As you may have seen in my Boulder post, I was in Boulder for a week, then got stuck with an 8.5 hour flight delay, resulting in me flying into Minneapolis around 3 am, going to sleep, working for five hours, unpacking then repacking, and leaving to fly to Detroit the next morning at 8 am. When I landed in Detroit, I was in a car for right around four hours before arriving to my hotel. After all that transportation craziness, the Radisson Blu Aqua was EXACTLY the relaxing spot I needed! I could’ve stayed in this hotel all weekend and been just fine. My gorgeous suite had floor to ceiling windows with a view of both the lovely rooftop garden and Millenium Park, as well as Chicago itself, so it’s not like I wouldn’t not be seeing the city, right? 😂 It’s perfect for the solo female traveler who wants to pamper herself. Just a few of the upper upscale amenities the hotel has to offer are a rooftop terrace pool and hot tub {with an incredible view of Chicago}, a wonderful outdoor track surrounded by beautiful gardens, and indoor pool and hot tub, room service, state-of-the-art gym, and so much more. I honestly still can’t get over the fact that my bathroom had both a lighted mirror and a magnified mirror, which had my inner beauty guru freaking out. I’ve stayed at several nice hotels in my short lifetime, but I can honestly say that the Radisson Blu Aqua was my favorite out of all of them. What really set this hotel apart for me was the friendliness and willingness of the staff there to go above and beyond for me without hesitation. I never once felt as if I was being looked down upon or snubbed by the hotel staff, which I’ve oftentimes felt when traveling alone. A doorman watches the front door, hotel staff was frequently seen on each floor, and both elevators in the hotel are only accessible via your room key, making the hotel incredibly safe – a must when traveling alone! I’ll be doing a more in-depth review of this hotel soon along with releasing my Chicago vlog which will have video footage of it. 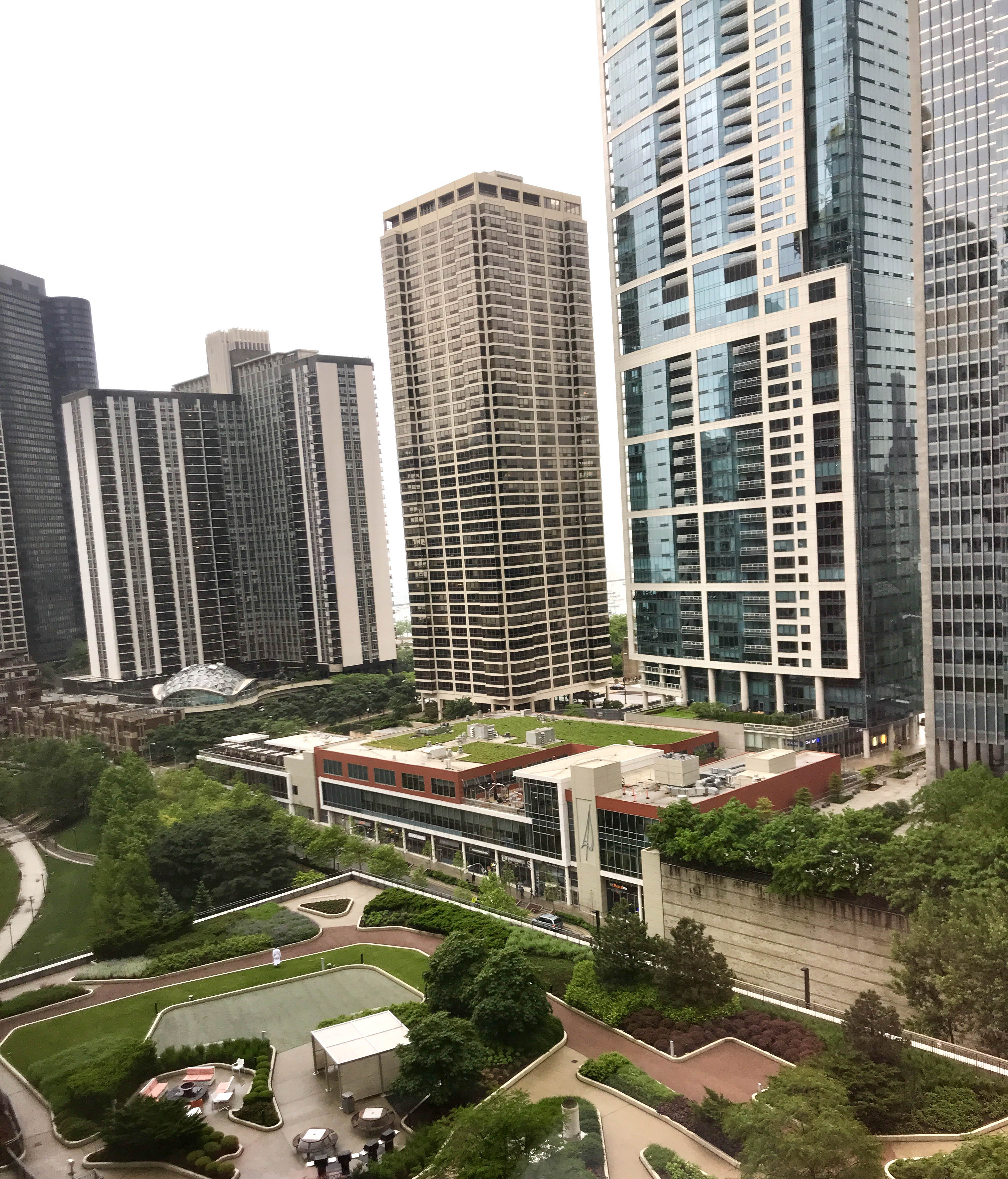 The rooftop garden and track at the Radisson Blu Aqua Chicago as captured from my suite. The red path is part of the track! 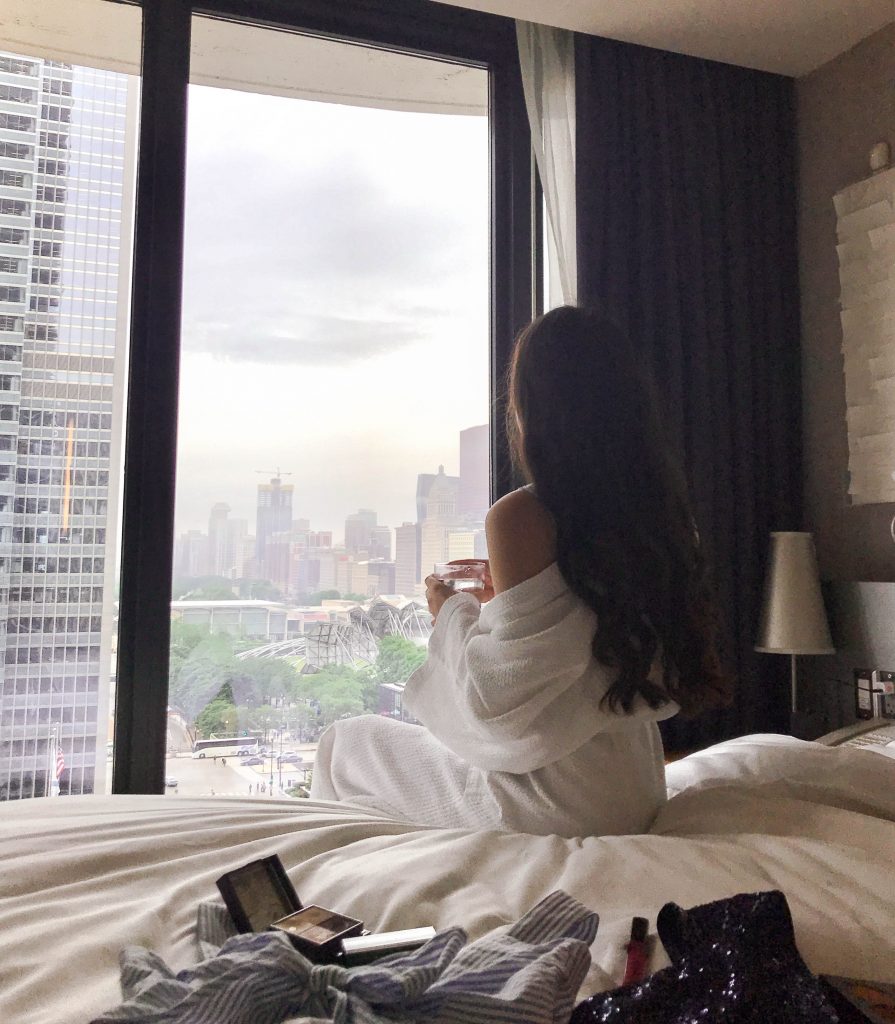 Yup, that’s Millenium Park, and waking up to windows with a floor to ceiling view of it for the weekend was such a dream.

This is where Chicago got tricky for me. As calming as the city was for me, I’m not the touristy type, and Chicago’s hidden gems were well hidden. I’m at museums all the time in New York, so going to Chicago staples such as the Adler Planetarium, Field Museum, and Art Institute just didn’t really appeal to me. If you haven’t been to the Adler at least once, however, I highly recommend it. I went when I was maybe 10 and LOVED it. I also thought I was going to be an astronomer at the time, but that’s another story.

The purpose of my Chicago weekend getaway was to spend Friday at the music festival, Spring Awakening {99.9% of the reason I went to SA was because of Alison Wonderland. She’s my favorite and I’ve wanted to see her for years}. Although Spring Awakening only happens once a year at the beginning of June in Addams/Medill Park, Chicago has tons of wonderful performers passing through the city all the time! If you’re considering Spring Awakening as a music festival, I’ll be doing a guide on the best way to do it within the coming weeks. Otherwise, the Chicago Theatre is absolutely iconic and from an architectural aspect, gorgeous. The fantastic part about going to a show in a theater is that if you’re self conscious about being alone, it’s not noticeable. You go into the theatre, sit in the dark for a few hours, and leave. When I first started traveling on my own I was SO self conscious about being seen alone at restaurants, parks, movies, etc. before realizing that I’d rather enjoy every experience possible than worry about what other people might think of me. 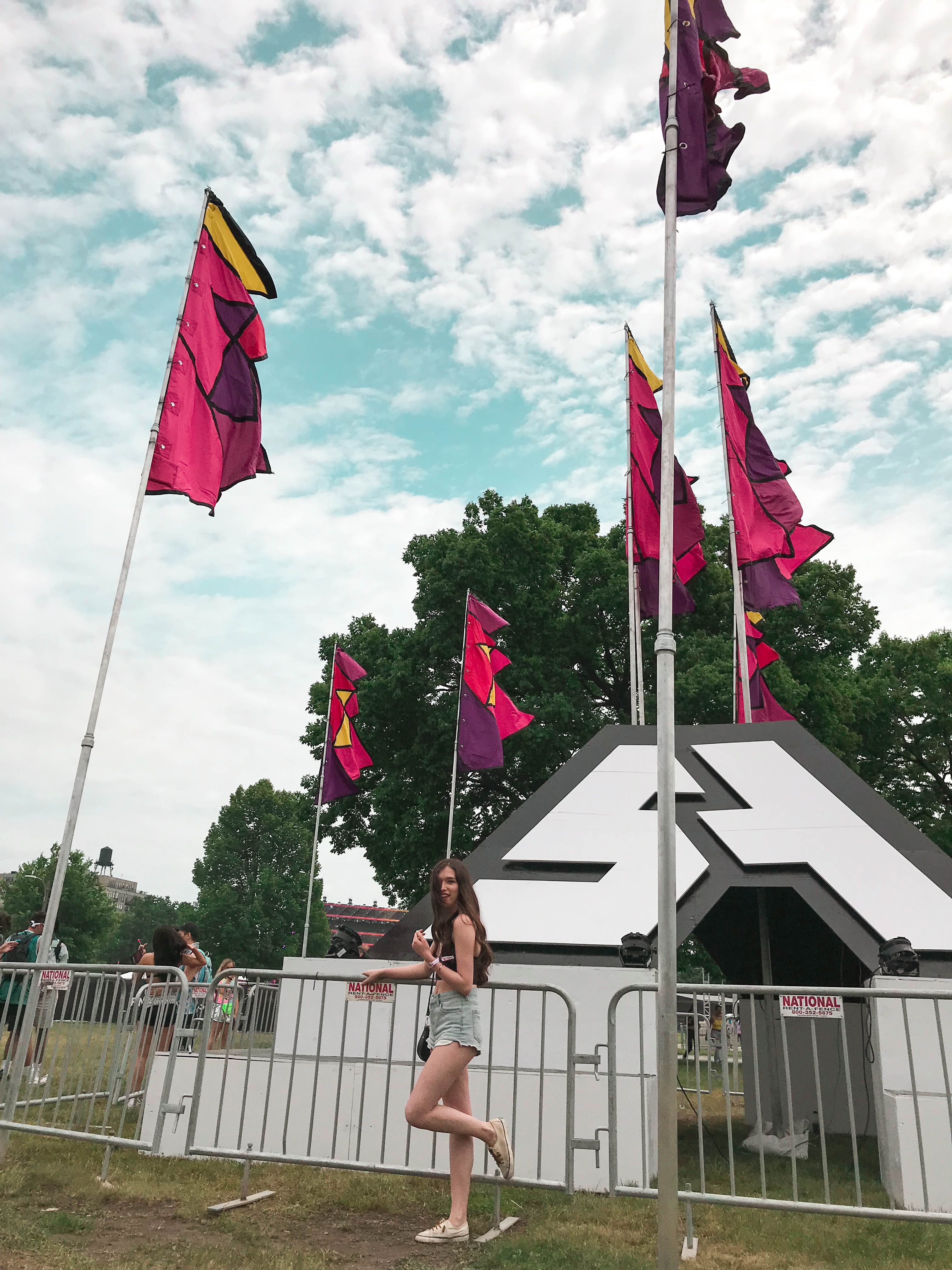 I might sound COMPLETELY ridiculous saying this, but as much as I absolutely love the Bloomingdale’s flagship store on 59th and Lex in the City, the Bloomingdale’s Michigan Avenue store is something special. No, they don’t have the extensive collection of luxury boutiques that the Manhattan flagship has or the dream shoe floor, but the Michigan Ave location does have the best deals I’ve ever seen for high end clothing at a department store maybe ever. On several occasions now, I’ve seen or bought clothing that were originally hundreds of dollars on sale for $50 or less. As a matter of fact, not too long ago I walked away with three formal full length gowns that were $350+ retail each for about $47 each. This past weekend I found a Ted Baker camisole there for under $30 {then cried internally slightly that my size was out of stock}. Crazy, but a total fashion lover’s promise land, especially for the solo female traveler.

Now THIS is more my forte when it comes to Chicago. From quick bites to meals, I’ve got options for you.

For the Quick Meal on the Go – Wow Bao

I was introduced to Wow Bao in Chicago by a friend a few years ago while we were in Chi for ballet auditions. Being a vegetarian, I order the edamame bao. Wow Bao’s bao buns are a lighter, more healthy alternative to traditional fast food, and a more unique approach to healthier fast food than the millionth salad bar or grab and go sushi chain to exist.

Several locations in Chicago, if you want the full Giordano’s experience, I recommend Magnificent Mile at 730 N. Rush St.

If you’re short on time, I recommend Millenium Park at 130 E. Randolph St. This one was just steps away from the Radisson Blu Aqua! A win/win, especially when you’re wanting some Giordano’s at 11 pm!

Like Mike’s Cannoli vs. Modern Pastry rivalry in Boston, in Chicago, that rivalry becomes Giordano’s vs. Pizza Uno {For those wondering, not Mike’s or Modern, Maria’s Pastry is where it’s at if you want good cannoli in Boston}. My winner of this longtime rivalry is Giordano’s. While Chicago deep dish will never come close to a New York slice for me, Giordano’s makes a fantastic “Veggie Supreme” pizza loaded with all sorts of different vegetables. Another huge plus for Giordano’s is their ability to make custom Gluten Free pizzas for anyone in your party that might have a gluten dietary restriction but still wants to experience pizza in Chicago.

For the Instagrammable Snack – Amorino

I absolutely adore Amorino. Not only is their gelato fantastic, it’s a prime competitor tp Taiyaki NYC for the cutest ice cream ever. Amorino scoops their gelato to look just like a rose! Better get that Snap fast, though, gelato melts quickly! 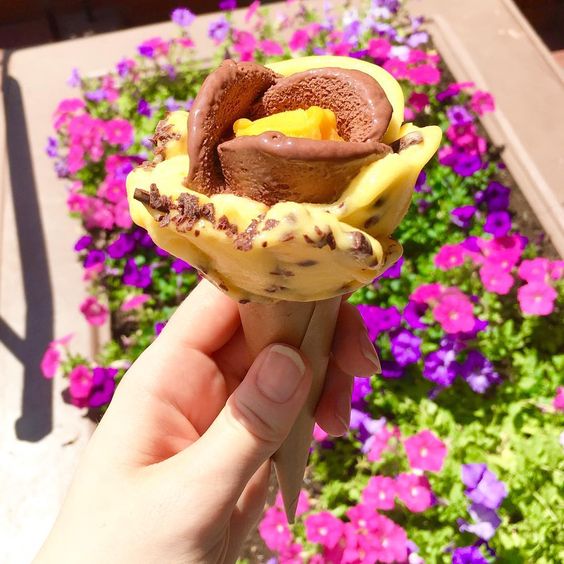 For a Sweet Snack – Sprinkles Cupcakes

No matter what city I’m in, Sprinkles will always take the cake – literally! After traveling all over the country and trying several cupcake shops, I can confidently say that Sprinkles is the best out of all of them, and the Chicago location is no exception. Amorino may have the most Instagrammable food, but Sprinkles has the equally as ‘grammable Cupcake ATM, which is open 24/7 for all your cupcake needs and yes, is a vending machine for cupcakes. 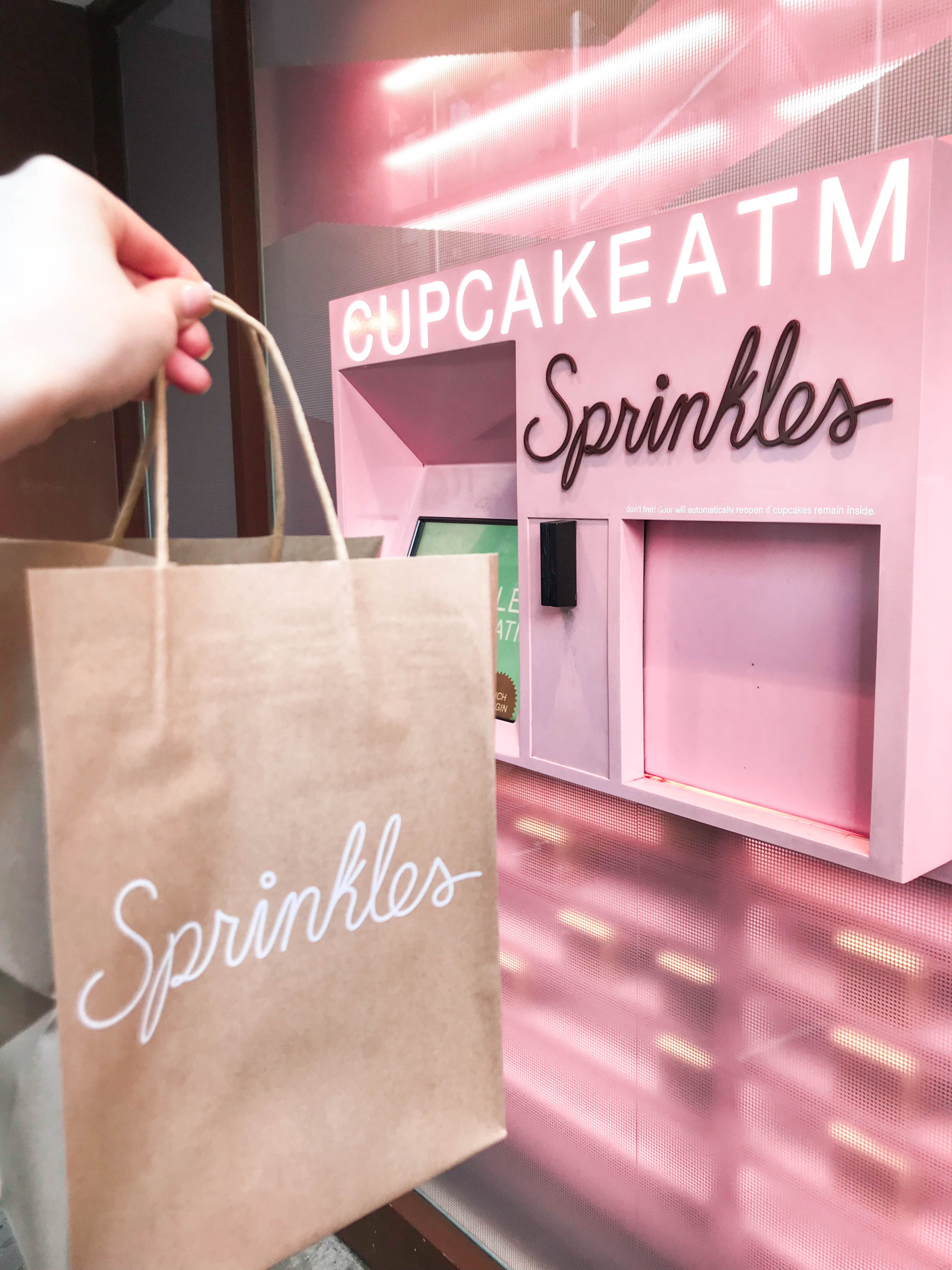 Pin the image below to save all these recommendations for your next trip to Chicago!

A huge thank you to the Radisson Blu Aqua on partnering with me to write this post! I was gifted a suite at their beautiful hotel in exchange for an honest review, and this is just that. I would never post about a product, brand, or service to you all that I didn’t actually love or find interesting. Their hotel really was among the best I’ve ever stayed in, you’ll see just why in my upcoming content!

8 responses to “A Single Girl’s Guide to Chicago – Where to Stay, What to Do, Where to Eat”