Why I’m Terrible at Cooking- My Cooking Fail Stories

Cooking.  A skill most people use by the time they’re 13 so they can make box mac and cheese or ramen at the very least. A skill that I do not excel at.  By not excel at, I mean fail.  The following stories serve as my evidence: 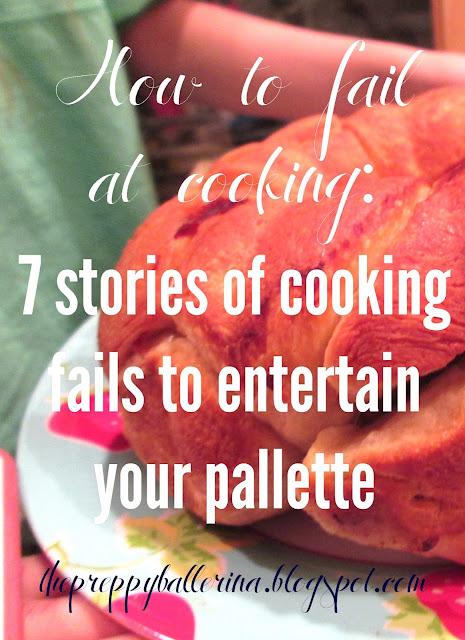 The Pop-Unders
Popovers are one of my favorite foods.  When done correctly, the are buttery, light, and fluffy on the inside with a crisp outer shell.  Yeah, mine were nothing like that. Imagine hockey pucks filled with a very thin strip of condensed popover inside.  Mine were a little closer to that.  It begins with a girl, an iPad, and a cooking app with a recipe for “Easy Popovers.” Needless to say,, I am the girl and that recipe was anything but easy.  Why?  I ended up making a very soupy batter, pouring it into a muffin tin and sticking it into the oven.  Now, you may be thinking that I might have executed the recipe wrong, which I probably did, but I left the popovers in the oven for the recommended amount of time, then when I saw that they failed to pop, I kept leaving them in for an additional five minutes, then fifteen minutes, then an additional half hour.  I have no idea what in the world was going through my mind when I thought that something could be baked in the oven, have already turned completely brown, then would still be able to pop up and be light and fluffy on the inside.  I really don’t.

Are Mashed Potatoes Supposed to be Black?
The answer to the question is very much know, and while I know that and knew that at the time, I still managed to make it happen.  That, my friends, is what we call true skill.  My mom was actually helping me with this.  She basically told me what to throw in the pot and how much time to leave it on the stove, but what I missed in her instruction was that mashed potatoes need to be actively stirred in order for them not to burn.  I basically sat at the kitchen table unaware my potatoes were burning.  Once I realized it, it left a mess of potatoes and a pot cleaning nightmare.

Mac and Sticky Cheese
“All you have to do is make the noodles and throw milk in the powder and you’re done!”
This is all that really had to happen when I was trying to make box mac and cheese, a skill most people know by the time they’re 12. Yet, I sit here writing to you at 17 still wondering how in the world I managed to screw up box mac and cheese not once, but twice, and to this day have still not had any success. The first time I actually forgot I was making noodles.  The second my sauce ended up sticky and clumpy and weird.  Needless to say, I do not plan on venturing into the world of box mac and cheese again anytime soon.

Would You Like Some Cheese and Tortilla with that Grease?
Think of how many kid friendly, quick and easy meals there are that require just a couple minutes in a skillet on the stove. Grilled cheese is one, another?  Quesadillas.  I love quesadillas, actually they’re one of the few Mexican food dishes I like, and are supposed to be fairly easy to make.  I’ve seen my mom and friends of mine make them time and time again to the point where I have the procedure entirely memorized.  A little oil in the pan over medium heat, tortilla-cheese-tortilla, a few minutes one side, flip, and a few minutes on the other side.  While babysitting, I had to make lunch for a few kids so I decided what better to do than quesadillas?  I started making them and everything seemed to be going fine, until it came time to flip the first one.  Cheese spilled all over the pan and started burning to the edges.  After I somehow managed to flip it all the way over, I realized that the quesadilla was absolutely drenched in grease and oil.  Why?  Too much oil in the pan + the natural grease and oil from the cheese did not mix well together and I, of course, being the opposite of a master chef did not completely think through that little fact which is part of a thing called COMMON SENSE.

The Six Minute Popcorn
The worst part about this story is that it doesn’t even involve an oven or a stove, it involves a microwave.  Yes lovelies, I’ve managed to fail at microwaving. Now to be fair, I’m usually fine at microwave popcorn.  I’ve been know to microwave popcorn to perfection. This time, not so much.  I put the microwave in for my standard 3:45, however after feeling as if the popcorn wasn’t “popped enough,” I put it in for another, 15 seconds, then a minute, then another minute, until I realized the popcorn had been in the microwave for a full 6 minutes. To no surprise, I opened the bag to a clump of black, burned popcorn.  Before you ask, yes, I’ve learned my lesson.

The “Fresh Mango” Cupcakes
Being the amazing baker {not} that I am, I of course figured that I could successfully alter a basic vanilla cupcake recipe to feed my mango loving self.  Yeah no.  Let’s start with the fact that I couldn’t find any cupcake wrappers anywhere in my house so I decided to do the “quick and easy” handmade parchment square wrappers that I found on Pinterest.  Already failing and the actually baking hasn’t even begun. I cut up all the mango and threw it in with the rest of the batter, and when the cupcakes came out, they were… less than impressive.  Imagine a cornbread muffin with slimy fruit pieces sprinkled inside and that’s about an accurate depiction of my “fresh mango” cupcakes. Upon seeing that the cupcakes had almost no mango flavor and were not at all what I expected, I decided to alter the buttercream frosting to include mango so it would get that flavor.  The addition of mango and the mango juice in the frosting just weighted it down and made it really soupy and unworkable, the only thing that kept it on the cupcakes were the tall cupcake wrappers.  Never again, never again.

Fondant Does Not Mean Flour
Cake Boss.  Ace of Cakes.  Cupcake Wars. What do all these shows have in common?  Baked goods featuring intricate designs using fondant.  After finding what should’ve been an easy fondant recipe online, I, of course, wanted to give it a go.  I made about two dozen plain vanilla cupcakes which were a little dry, but eatable, and started on the fondant.  I had already started making the fondant before realizing that I didn’t have enough powdered sugar to make it.  Instead of reducing the recipe or sticking it in the fridge to finish later, I decided that because powdered sugar and flour had approximately the same consistency, I could just substitute the flour for the rest of the powdered sugar {what was I thinking?}.  WRONG.  Flour is nothing like powdered sugar, not in chemical composition, not in how they react with other substances, and certainly not in taste {again, what was I thinking?}.  I continued the recipe, adding more and more flour to try to make the fondant more consistent, to the point where there was way more flour than powdered sugar.  Although I may have made some form of fondant, it was dry, cracking, and oh yeah, bitter because of the flour.  Next time, the intricate cake decorations get left to the experts.

If I have learned anything from cooking over the years, it’s that there’s a reason why takeout exists, and I now have full appreciation for any restaurant that allows delivery.  What are your favorite cooking tips?  Any easy dishes you’d like to see me try and fail at?  Comment them below!