A firm decision to do or not to do something.

We hear it every year around the eve of the New Year, shoot, we’re all guilty of saying it at one point or another. You know the infamous last words of the year, those being “my New Year’s resolution is to lose 15 pounds” or “this year I resolve to take up a new hobby.” These words sound so good in theory. Like so good, but here’s the open secret: almost 100% of the time, these are just empty promises we tell ourselves on what seems as if it could finally be that monumental turning point to pick ourselves up and pull ourselves together. That’s not to say New Year’s resolutions don’t work for some people, I’ve seen it happen. But the reality is that telling ourselves we’re going to do these things magically that we haven’t started yet, doesn’t hold ourselves accountable for when we don’t. If you can talk yourself into it, you can talk yourself out of it.

I’m not saying that we shouldn’t make an effort to better ourselves at the opportunity of a new year, a new beginning. I too like the idea of a new year bringing about some sort of change. My issue with the New Year’s resolution is that the inherent definition of the word “resolution” itself doesn’t lend itself to the idea of growth. “A firm decision to do or not to do something.” This definition suggests as if change can happen overnight, or just by saying it, when some of life’s greatest lessons aren’t learned in a day, but over a period of days, weeks, months, sometimes years. There were a few years when I made New Year’s resolutions {they should really just be called New Year’s decisions}, but by the end of the year they would be broken {or I wouldn’t even remember them, if I’m being completely honest} and I’d be disappointed that I seemingly didn’t “accomplish” something. No one should ever look back on their year and associate the word “broken” with the way they chose to live their life just because they didn’t achieve a decision they made 15 minutes before the ball dropped and the new year began. We have success in our lives with or without a statement saying that we’ve achieved something.

So this year, instead of making New Year’s resolutions that I knew I wouldn’t keep or remember anyway, I decided to look back on the last year of my life and reflect on what I had gone through and what I had learned, to make a goals for myself to work on over the course of the next year. Maybe I’ll achieve a few of them, most likely I won’t. I don’t need to achieve some sort of nirvana with any of them by the end of the year to feel like I’ve accomplished something. As long as I feel as if I’m closer to that goal at the end of the year than I am now, I’m calling it a success. Regardless, taking some time to examine this past year really made me reflect on what I had gone through both in my personal and work life, which is infinitely more valuable to me than a resolution. Unlike simply making a resolution, I’ll be able to take my past experiences of the prior year, learn lessons from them, and use those lessons to grow in the new year. 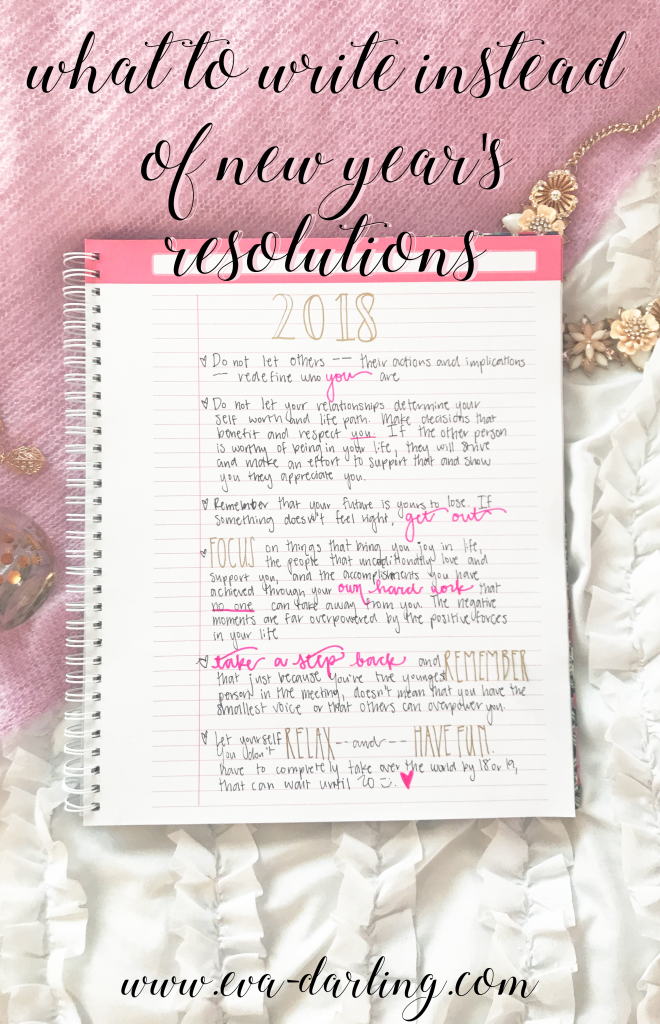