Here’s What Going to NYFW is Really Like: How to Go to NYFW

Fashion shows, designer clothing, and on-the-go New York moment-type outfit shots for days. On Instagram, New York Fashion Week seems like the most glamorous week that fashion has to offer. Instagram is right. NYFW is glamorous and one of my most incredible experiences to date, however, there is an entirely un-glamorous side that you’ll never find any fashion blogger or celebrity talking about. I’m here to tell you all about the ups and downs, and give some tips on how you can avoid these mistakes yourself.

There’s really four ways to get photos of what you’re wearing:

-Try to schedule a quick photo shoot in between shows, knowing full well that you can’t go over or you’ll miss your show

-Shoot on an entirely different day when you don’t have shows, but re-wear the outfit you wore earlier in the week

-Wake up early {early} in the morning to shoot

-You try to get the business cards of every single street style photographer and paparazzi that shot your outfit that day, and attempt to get the photos from them {I highly don’t recommend this method}.

I’ve done all of the above options when it comes to NYFW, and of the options, shooting on an entirely different day is probably my favorite option out of all of them. Scheduling a shoot on a day with shows for me has resulted in me literally running down the street in my stilettos, or shooting in the dark after my last show ends {which I just don’t prefer for the sake of my Instagram feed}. I’m just the most anti-morning person you’ll meet, so the idea of shooting at 6 am would probably just result in photos with bigger bags under my eyes than the one I’m carrying. 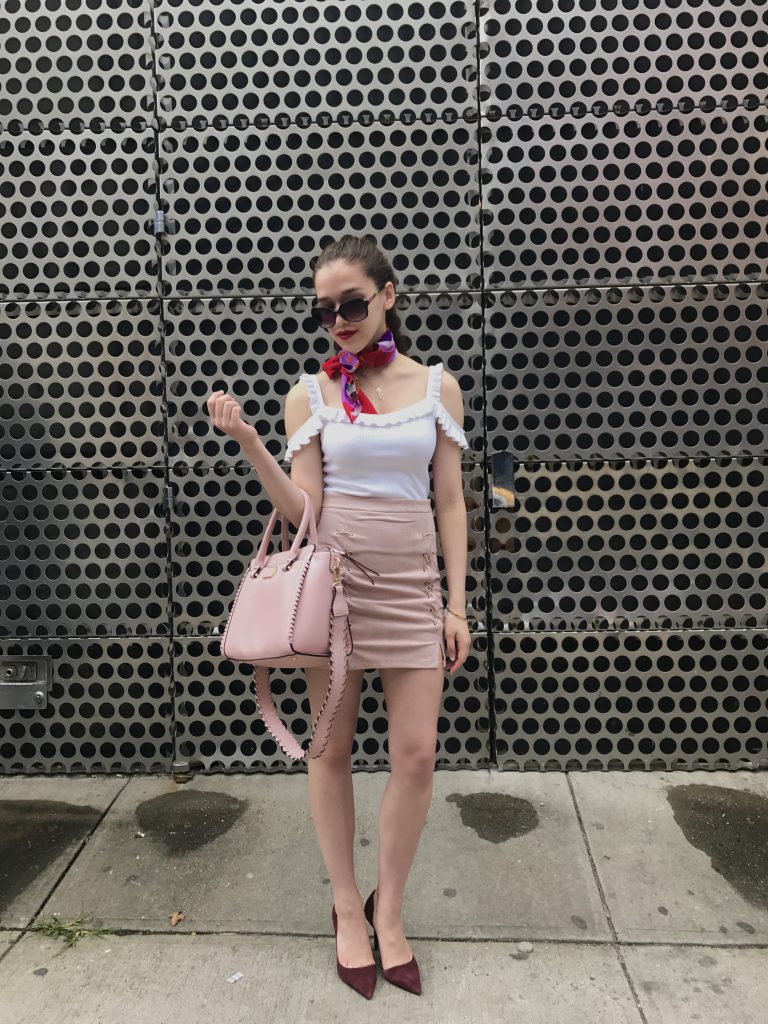 A fellow blogger had me take a few photos of her, so I had her return the favor after our show ended. I didn’t have a photographer that day and needed Instagram content.

I’ve seen more than a few absolutely fabulous pairs of shoes at NYFW, but for most bloggers, that’s not the only pair of shoes on them. It may seem like everyone’s running through SoHo in stilettos all week, but that’s definitely not the truth. As I mentioned in my NYFW handbag essentials post, myself, along with a lot of other NYFW guests, carry a second, more sensible pair of shoes in their handbags. Why? Here’s the reality of stilettos in New York:

-The sidewalk grates eat them. New York’s sidewalks are full of metal grates, and I’ve seen {and had my own} stilettos getting stuck and scratched between the metal more times than I can count.

-Trying to take the steep subway stairs in them is kind of a nightmare. New Yorkers are a very impatient type of people, and tip-toeing down the stairs to get to the subway will probably result in more than one disgruntled grumble from the businessmen behind you.

-After a full day of shows, shoots, meetings, and parties, those cute pearl stilettos are going to seem like your own personal enemy. It really doesn’t matter how cute or comfortable they were at the beginning of the day, it’s just the truth.

So what do you do when you still want to make it *look* like you were wearing beautiful shoes all day or at the shows? You just wear them for the shoot and change right after. You take the subway in flats and change into your 4″ tall shoes a couple blocks from the venue. The truth of the matter is that during fashion week you’ll be on your feet A LOT. Like way more than you actually think, which is why backup shoes are crucial {even if I don’t believe in taking your heels off until the night is over the other 364 days of the year}. Another option that’s more NYC-friendly when it comes to heels is doing a chunky heel vs. a stiletto heel. Chunky heels are not only more comfortable, but they also are way less likely to get stuck between a grate somewhere. If you are wearing your stilettos across a metal grate, keep your weight on the ball of your foot, and none on your heel. 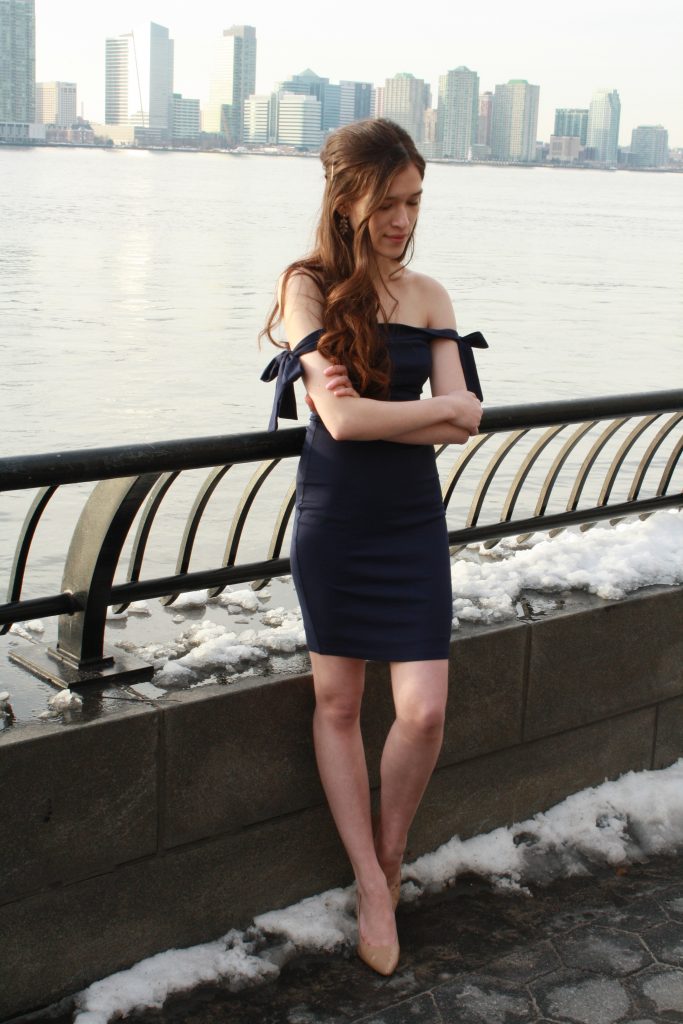 True story: This shot is from my first NYFW, and I ran around in these stilettos in the slush and dirty snow of SoHo for over an hour trying to find my way to a NYU dorm to try to surprise my friend who didn’t know I was in the City.

The shows are not only the point of NYFW, but also my favorite part of it. I’m always beyond excited to see what new things designers are dreaming up for the upcoming seasons. Although it may seem like your favorite Instagrammer is going from show to show seamlessly, here’s the truth:

-There’s a lot of waiting involved with shows. Like A LOT of waiting. There’s two types of invites at fashion week shows: seated and standing. Seated guests have an actual seat number, standing guests hang back to fill in where seating numbers either weren’t given, or to stand around the edges of the show. Regardless of what type of invite you have, you’ll be waiting. Seated guests get allowed into the show before standing, however even then, many shows don’t open their doors for seating until five to ten minutes before the show is supposed to start, or in some cases, after the show is supposed to start. It is recommended to show up anywhere between a half hour and fifteen minutes before a show is supposed to start, so as I mentioned with shoes, all that extra standing is just another reason to have backup shoes.

-Although some shows will all be at Spring Studios or Skylight Clarkson Square {a moment of silence for Skylight, please}, there will be so many more that are scattered across the city. Yes, you can take a Lexus car if you get invited to x amount of shows that season, however traffic in Manhattan is horrible. In many cases, you’ll get there faster if you take the subway, or even walk. Just be sure to check for train delays if you’re taking that option. I once chose the subway over a car because the subway was going to be about half the travel time, however that backfired quickly on me when an emergency situation came up at a different station that held up all of the trains. My advice to you is to check this NYCT Subway Twitter account before taking a train during NYFW. If there’s a delay with your train, chances are they’ll have it tweeted there.

So no, that Instagram it-girl you follow is likely not seamlessly going from show to show. Even though NYFW shows can have a few little stresses surrounding them, getting to go is still an amazing experience and an absolutely wonderful privilege! 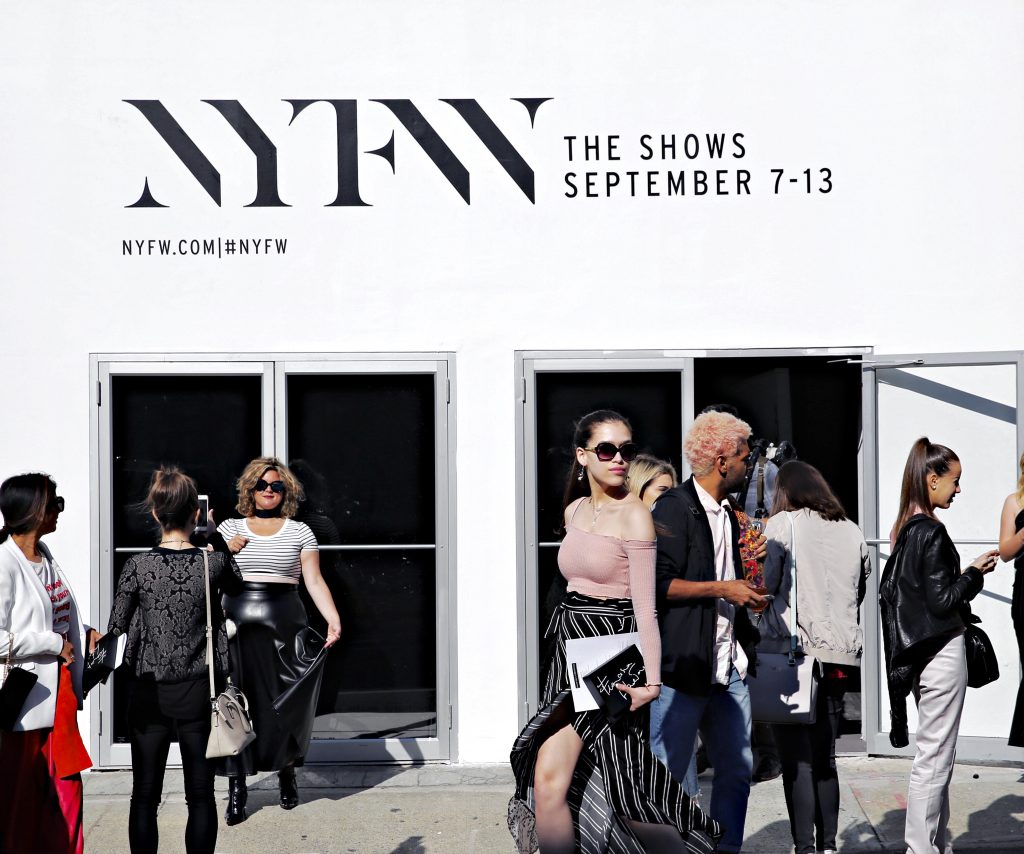 I had about five minutes to shoot this outfit between the time my 9 am show ended and my 10 am show started. This is probably one of my most stressful shots from a NYFW. Thank you to my friend Miki of Blogtrendz and her husband for shooting them in such a pinch!

I always say that for every one runway show at NYFW, there’s really two shows. The official show that happens on the runway, and the unofficial show that happens on the street. Street style at NYFW is like no other, and it is high stakes. Most will recommend going to one show in the morning, one show in the afternoon/evening, and one party at night. This gives you time to go back to wherever you’re staying, recharge, and refresh. It also builds in time to change your outfit, eat, and shoot. For those of us who can’t follow that rule, it creates some interesting situations.

-Changing on the streets of NYC. Although I haven’t done it myself {except my shoes}, I’ve seen people changing on the street, going into hotel or restaurant bathrooms to change, or really any place they can switch into a new outfit. Usually what works for a show in the morning, isn’t going to be appropriate at 8 pm.

-The struggle of the February shows. Not only does your outfit have to be stylish, but you’re going to need to find a cute coat that works with it. The February season is cold, so there’s no way around it. Then, when you find the perfect coat, what do you do? Do you wear it like a normal coat to stay warm and have no one see your outfit or do you deal with the cold and drape it over your shoulders so everyone can still see your outfit?

Typically, I’ll have a couple neutral coats or capes that will work with more than one outfit. I’ll wear my coat normally to stay warm, then when I’m a couple blocks from the venue I’ll switch and just drape it over my shoulders to expose my outfit. Since my coat is a neutral color and not a statement, it isn’t as noticeable if I wear it more than one time. I also save some money this way, because overall trying to buy seven different coats for NYFW isn’t cheap, and I probably won’t wear statement coats that often outside of fashion week anyway. 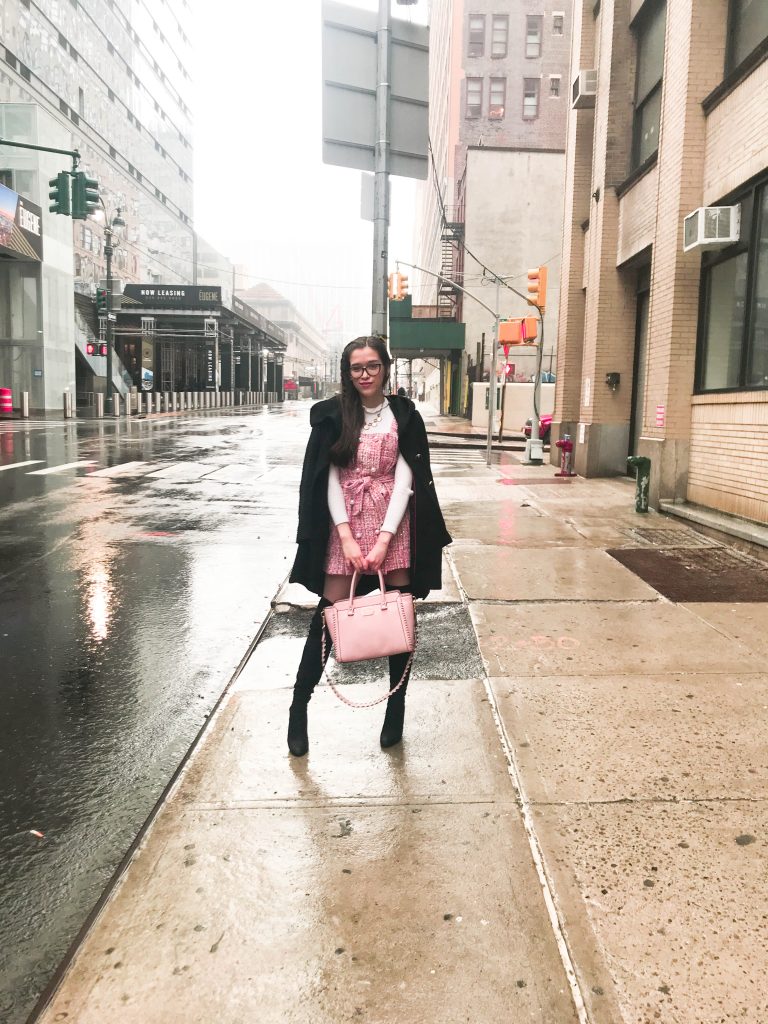 Look at that solid coat drape. This shot was taken by my friend Jose {peep his Instagram here, and his creative collective here} who I dragged along to a girly networking event before having to go to my next show. It was raining, but again, I needed a shot of this outfit for the ‘gram.

So yes, there is an entirely un-glamorous side to a seemingly glamorous week. For me, NYFW is still an incredible week that I couldn’t feel more honored to get the opportunity to go to. Between seeing the most incredible new collections and getting to reunite with friends from across the country while getting to make new ones, it’s a wonderful experience if you don’t let the stress of it all overshadow all the good things about the week.

WHAT’S IN THE PHOTOS

4 responses to “Here’s What Going to NYFW is Really Like: How to Go to NYFW”