My college decision was…stressful, to say the least. Choosing a college was all I could think about from the time the acceptance letters started rolling in, to that May 1st decision day. Countless nights were spent tossing and turning about where I would spend the next four years of my life. There was an enormous amount of pressure put on me by my family, community, and school, about which one college I would choose, and not to make the wrong decision. Through the process of making the decision and the aftermath of the decision I made, there are things I wish that someone would have told me, which is now what I’m here to share with you!

Before we start: In case you didn’t see my “Day in My Life at Parsons” video here, I go to Parsons School of Design at the New School in New York City for Fashion Design. If I mention any of the above things while explaining my decision in this post, that’s why! 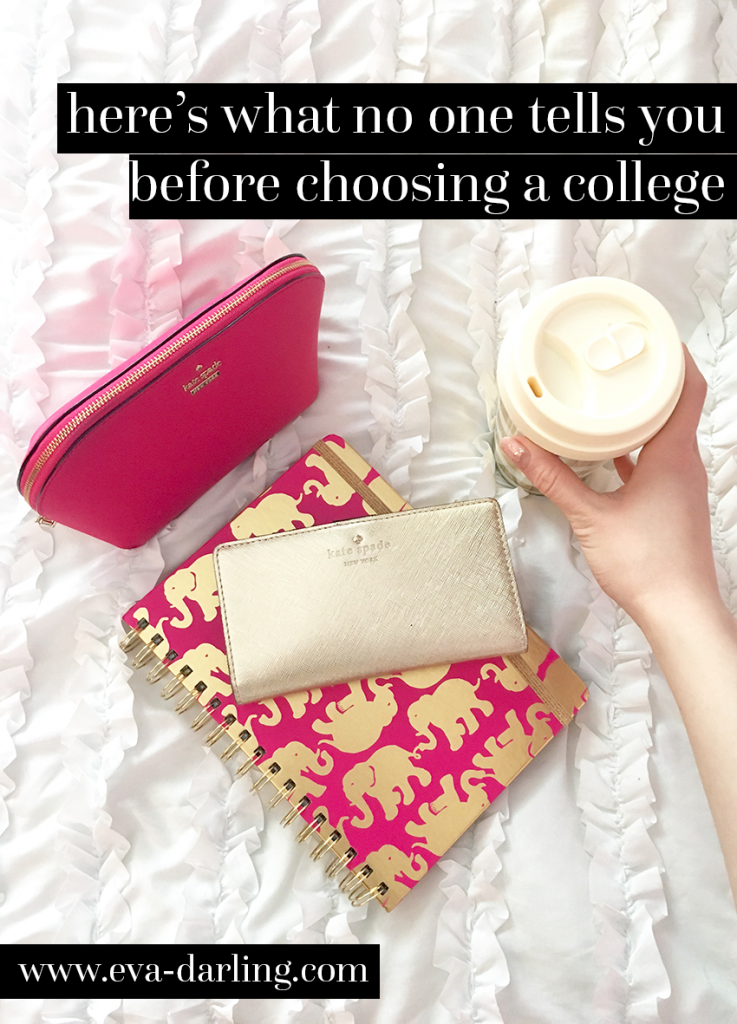 Yes, there is that pesky little May 1st deadline for choosing a school, but the school that you choose doesn’t necessarily have to be the school that you graduate from four years later. Whether you’re dead set or uncertain about your decision, if you spend a semester or two at the school you chose and it’s just not for you, don’t worry. You can always transfer. I have several friends who after first semester knew that they just wanted out because their major interest changed, or they ended up not liking New York City, or they just weren’t vibing with how the school operates, so they’re applying for transfer, and that’s just fine. When I was making my college decision, it seemed as if wherever I chose was the end all be all. That if I screwed this decision up, I’d screw up the next four years of my life. That just isn’t true. When choosing a college, sometimes it takes a couple tries to find the place that’s perfect for you, which is totally okay! Before you decide that the school you chose isn’t for you, make sure that you actually give it a chance, which brings me to my next point:

College Doesn’t Work Unless You Do

So you finally go through the stressful decision making process, and arrive in August or September for your first day of school. If you’re like most college students, this is your first time moving away from home. Being thrown into a situation where you have to make a first impression on thousands of new faces at once is well, really stressful. It’s easy to get homesick, feel overwhelmed and intimated, and basically just want to curl up into a ball because you feel alone in this sea of new people. The trick to getting comfortable and enjoying college is to make the effort. Put yourself out there, start the conversation. Don’t wait for people to come to you. So you’re in a lecture with 400 people? That’s 400 potential friends. Turn to the person on your right or your left and ask some stupid question that you probably already know the answer to such as “Is this {insert class name here}?” “Is the reading due next week or the week after?” or “What’s this professor’s name, again?” After the other person responds, take the opportunity to introduce yourself, saying “Hi, I’m ____, nice to meet you!” They’ll introduce themselves back {unless they’re trying to be some sort of mysterious, brooding character from a mid-2000’s teen drama series that has an act everyone can see right through anyway}. Don’t leave the conversation at that. Chances are that they’re feeling just as alone as you are, so ask “Are you from {insert state or city your college is in here} or somewhere else?” When they respond, ask them “What did you like about growing up here?” or “Oh, what is {their hometown or state} like?” If they’re missing home, they’ll be excited to have the opportunity to talk about something familiar and warm in a place that’s currently new and different. If you’re in a class of 400 people, feel free to try to use this little small talk conversation 399 more times.

While this may really seem like advice for while you’re actually in college {which it is}, my point in telling you this now is to show you that even though you might be choosing a college that seems perfect for you, sometimes it might take a little bit of time for that perfect fit to start feeling perfect. The school itself might be wonderful, but they never tell you in the college decision process that what comes with a college is a community, and finding your place in that community will take a little bit of patience. That’s why it’s important not to beat yourself up that you chose the wrong school or jump to the conclusion that you did within the first few months in college. Everyone finds their place at a different pace.

You’re the Only One That Can Establish What’s Important

Location, price, program ranking, national ranking, education quality, food, ethnic composition, extracurricular programs, alumni network, job placement, and so many more are on the extensive list of criteria that your high school or college counselor has probably already told you that you should consider while choosing a school. Growing up, I was always told that education quality, program rigorousness, and other similar criteria were the most important factors in choosing a school. Criteria such as location and food quality were “superficial,” and should be secondary to the others. While I don’t necessarily think that food quality should be your only deciding factor, some of the “superficial,” criteria really do matter, and should be taken seriously. For example, location. I ruled out a fantastic school because it was in the middle of nowhere. Why? I knew that if I was in the middle of Ohio for four years without any sort of city scene or faster paced lifestyle, I would bored out of my mind, and would probably go crazy. I’d hate it. If you’re in a city without much to do, food might become a more important criteria for you. If your dining hall doesn’t have very good food, and there’s not many good places around the school to get food elsewhere, you might not enjoy the next four years of your life all that much. Either you’ll be eating food you don’t like for four years, or you’ll be forced to cook for yourself all the time while trying to study for your tests and get your homework done {yes, I understand that many college students cook for themselves regularly, but it’s always nice to at least have the option of getting semi-decent takeaway instead when you just don’t feel like cooking}.

You are the only one that can decide which criteria are important. Don’t let anyone tell you that your criteria is “superficial,” because at the end of the day, those “superficial” criteria could be the make or break as to whether you enjoy your college experience.

Admittedly, I chose my school because the program for my major really is incredibly, and the rankings prove that {second in the world for both fashion design and in art and design schools. If that isn’t a reason to be #parsonsproud I don’t know what is. Also, take that RISD and MIT}. The location {NYC}, was really just a happy accident and the cherry on top. I didn’t exclusively choose Parsons because it’s in NYC, however it was a factor in my Drexel University vs. Parsons decision that Drexel is in Philadelphia, while Parsons is in NYC where there’s a lot more opportunity to make connections in my career field. Through that, never did it ever cross my mind about what living in New York City would REALLY be like. I didn’t realize just how important location really is in your college decision until I got to Parsons. All of a sudden, students were applying for transfer left and right because they just didn’t like living in NYC. NYC was too different from home, or it was too noisy or too crazy or too crowded. Before you choose a college, think through the location, and make sure that you fully understand the logistics of living in that city. Example: when I was trying to decide if I wanted to go to Central Saint Martins of the University of the Arts London system, I figured out that because of how the school is laid out, I’d have to commute 45 minutes every day to get to school, and I wouldn’t get much of an opportunity to meet people from other schools in the university because of just how spread out the university is across London.

If you want to move away but are concerned about homesickness, pick a school in a city that’s only slightly different than your own. I’m from Minneapolis {really I’m from a suburb of Minneapolis, but I spent a ton of time, like six days a week for several hours a day, in downtown Minneapolis growing up, so for the purpose of this example, I’m from Minneapolis}, which is a clean and somewhat safe downtown area. If I wanted to be out of state but cut down on my homesickness, I’d probably choose Chicago, which is really a bigger version of Minneapolis with better shopping, or Milwaukee, which is a slightly less commercial and smaller version of Minneapolis. Both cities are within six hours of Minneapolis, which would give me the opportunity to get away from home, but neither city is wildly different than the city I called home for 18 years, giving me a new place to call home that still has some level of familiarity.

If you get accepted to a school or go and tour a school and something just doesn’t feel right, it’s probably because it’s not right. Eliminating a perfectly good school because you’re just not feeling it is completely fine. You don’t need a solid reason to get rid of a school from your list, first impressions are everything, and if that school isn’t making the right impression on you, you don’t want to find yourself in a situation that feels forced. A friend of mine was split between an Ivy and a small private college. She didn’t feel as if Ivy culture and her style would blend well together, so she turned them down. She went with the small private school that felt like the right fit from the beginning, and hasn’t looked back since.

Whether you’re torn between several schools or have just about made your decision, keeping these tips in mind will hopefully help you come to the best decision for you.

CURRENTLY IN MY CLOSET