I’ll stand firm that only New York can do pizza right, but if there’s one country whose carbs just can’t be beat, it’s France. My dad always had baguettes in our house growing up, but after 18 years of eating American French bread, I’ve truly never had a better baguette before I went to Paris. So, how do you even go about ordering a pastry in France? Sure, a chocolate croissant in the States is a chocolate croissant in Paris, but it’s called something completely different. I’m here to help you sort out a few of the most popular French pastry and bakery items! 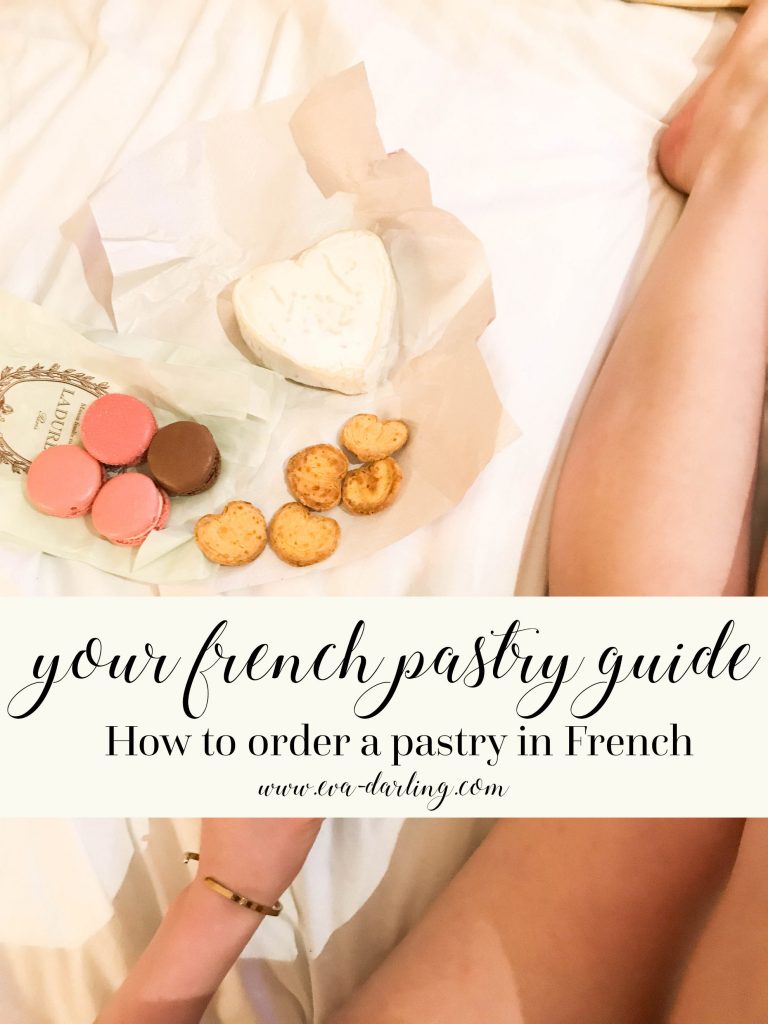 Facts: The best bakery I found in Paris was Le Fournil de Léa, located at 34 Rue de Rochechouart. Their baguette tradition is a little steeper than buying a baguette at une épicerie {a grocery store} at 1.10 Euros vs. .90, but it’s completely worth it. Baguettes may not technically be pastries, but no way am I going to let you go to Paris without knowing how to properly order arguably the most popular food item there.

So how do you properly order a baguette in France?

Of all the different types of bread in France, there’s two types that really stand out for baguettes. La baguette tradition and la baguette classique.

According to French law, la baguette tradition can only have flour, water, leaven and salt. This is my preferred type of baguette!

La baguette classique is a regular baguette. Typically it is slightly less expensive than the traditional baguette.

Start by saying “je veux prendre” {I want to take} or “je voudrais” {I would like}. “J’aimerais” can also be used in polite settings, which translates into “I would like,” however I find that it is used less frequently that the former two.

Then insert your preferred bread. “Une baguette tradition,” or “une baguette classique.” If you’d like more than one, swap out “une” for “deux,” or “trois” {two or three}.

Finish off your order with a friendly “s’il vous plaît!” {please} and you’re done!

I told myself that I wouldn’t go to Ladurée when in Paris, because it’s way too easy for me to get it in New York. By complete chance, I stumbled upon the Ladurée flagship on the Champs-Élysées in Paris, and I just couldn’t resist stopping in. As it so happens, the flagship had a few flavors that were yet to hit the official Ladurée macaron menu. Ladurée was founded in Paris, I really should’ve known that the macarons there would be way better than at Ladurée in New York.

First and foremost, for the love of all things good and gracious, do not pronounce macaron as “macaroon.” A macaron {mac-kah-ron} is the french sandwich cookie we’re currently referencing, that has two delicate biscuits sandwiched together with a thin layer of jam, buttercream, or ganache. A macaroon is a cake-like coconut pastry made of egg white, coconut, and almonds, popular during Passover. They’re completely different desserts.

Next, insert the quanity of macarons in each flavor you want. In English, we tend to say our adjectives before our nouns. In French, we say our nouns before our adjectives {most of the time}. So instead of saying “un rose macaron,” say “un macaron à la rose.”

Of course there are tons of macaron flavors and each patisserie will have its own unique flavors, but these are just a few to help get you started.

Finish off the sentence with “s’il vous plaît!”

My dad used to always bring home palmiers for my sister and I after he picked me up from ballet. A palmier, literally translating into “palm tree” in French, is a palm leaf or butterfly wing shaped butter and sugar pastry. I really just think they look like little hearts {they’re also known as le cœur de France” for a reason}. Although I have had palmiers from bakeries before, I went to a supermarket in Paris and found a box of cheese and butter palmiers that were prepackaged.  I’m not going to lie, those things were basically like a French Cheez-It, and they were slightly amazing. I didn’t even know cheese palmiers existed prior. If you’re better than me and want to order a palmier from an actual bakery or patisserie, this is how to do it.

Palmiers are typically coated in butter and topped with sugar. The Arlette is the palmier’s cousin, and is essentially a cinnamon version of a palmier. Just make sure you know which version you want when ordering, and you’ll be fine.

Éclairs are oblong shaped pastries, filled with cream, and coated in icing. Traditional éclairs are chocolate, however variations include coffee, pistachio, rum, and various types of fruit. In all honestly, if you see me eating an oblong pastry, it’s probably a cannoli, not an éclair {not that éclairs aren’t wonderful, cannolis just have my heart}.

Just like with macarons, you”ll say the type of éclair after the word éclair itself, not before like in English.

There’s so many more French pastries, but just knowing “Je veux prendre,” “Je voudrais,” and “J’aimerais,” as well as “s’il vous plaît” will allow you to order any French pastry, or just whatever your heart desires in French.

Read the myths about Paris I debunked within my first 24 hours in the city here.

Currently in my Closet