I love Breakfast at Tiffany’s. I’ve been sitting at my computer for a good 10 minutes now trying to figure out how to intro this post, but at the end of the day, Breakfast at Tiffany’s is one of my all time favorite movies {being tied with none other than Roman Holiday}. Holly Golightly’s personality is the equivalent of Manhattan being wrapped up and put into one person. A sense of urgency, wonder, excitement, and a tiny moment of quiet when everything seems to calm down.

A dress from one of my favorite labels at the moment, Amanda Uprichard, arrived, and that’s when I knew what my next big project would be for Eva Darling.

I’ve seen a lot of Breakfast at Tiffany’s references or attempts to dress like Holly Golightly in the present day, but most of what I saw were Halloween costumes or copying piece by piece exactly what Holly wore in Breakfast at Tiffany’s oh-so-iconic opening scene. I hate to break it to y’all, but as much as I love a good tiara, they’re just not practical for running errands. Oh, and those elegant gloves Audrey wears? They’ll probably somehow get dirty before you even make it out the door of your apartment. It sounds cynical, but it’s really just the reality of life in Manhattan. I’ve almost given up on white denim altogether here, although somehow I’ve only managed to get them dirty once. What Holly Golightly’s style needed for the present day wasn’t yet another recreation, but a modern update on her classic style. Starting with the fact that in that very first scene, Holly would’ve stepped out of an Uber, not a taxi.

In that dress bag from Amanda Uprichard was a little black dress. While yes, my closet may already have a few of them, there was something so elegant and classic about this one in particular. It was classic, the material was a dream, and that’s when I got the idea to bring Holly into the 21st century. Originally, I was going to do an exact recreation of the outfit, all the way down to recreating the sheath dress Audrey Hepburn wears as Holly in the opening scene. As much as I loved the idea of doing an exact representation that was more high fashion than Halloween, it still didn’t seem quite right. Or quite wearable. I put down the pattern I drafted of the sheath, and picked up the updated version. 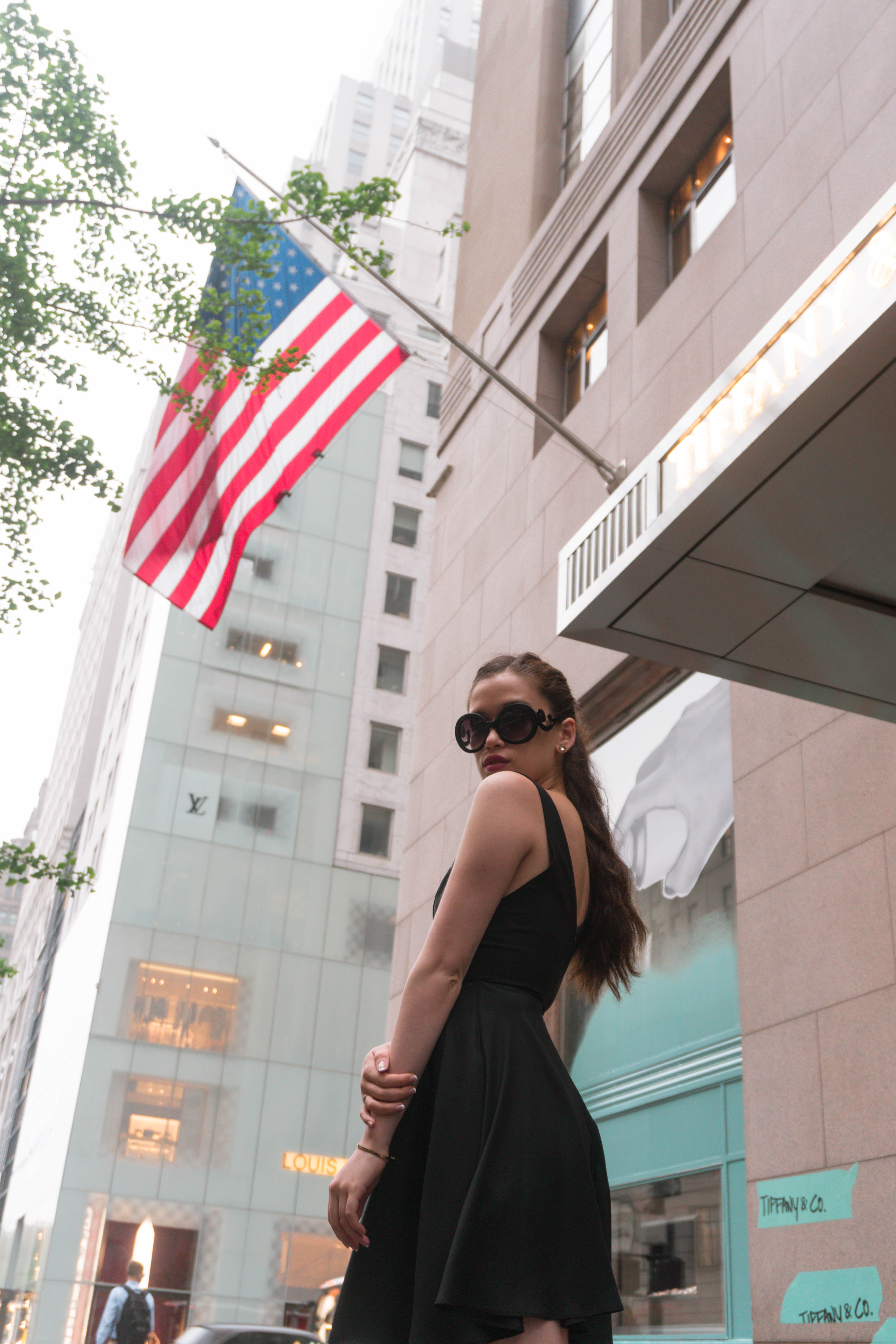 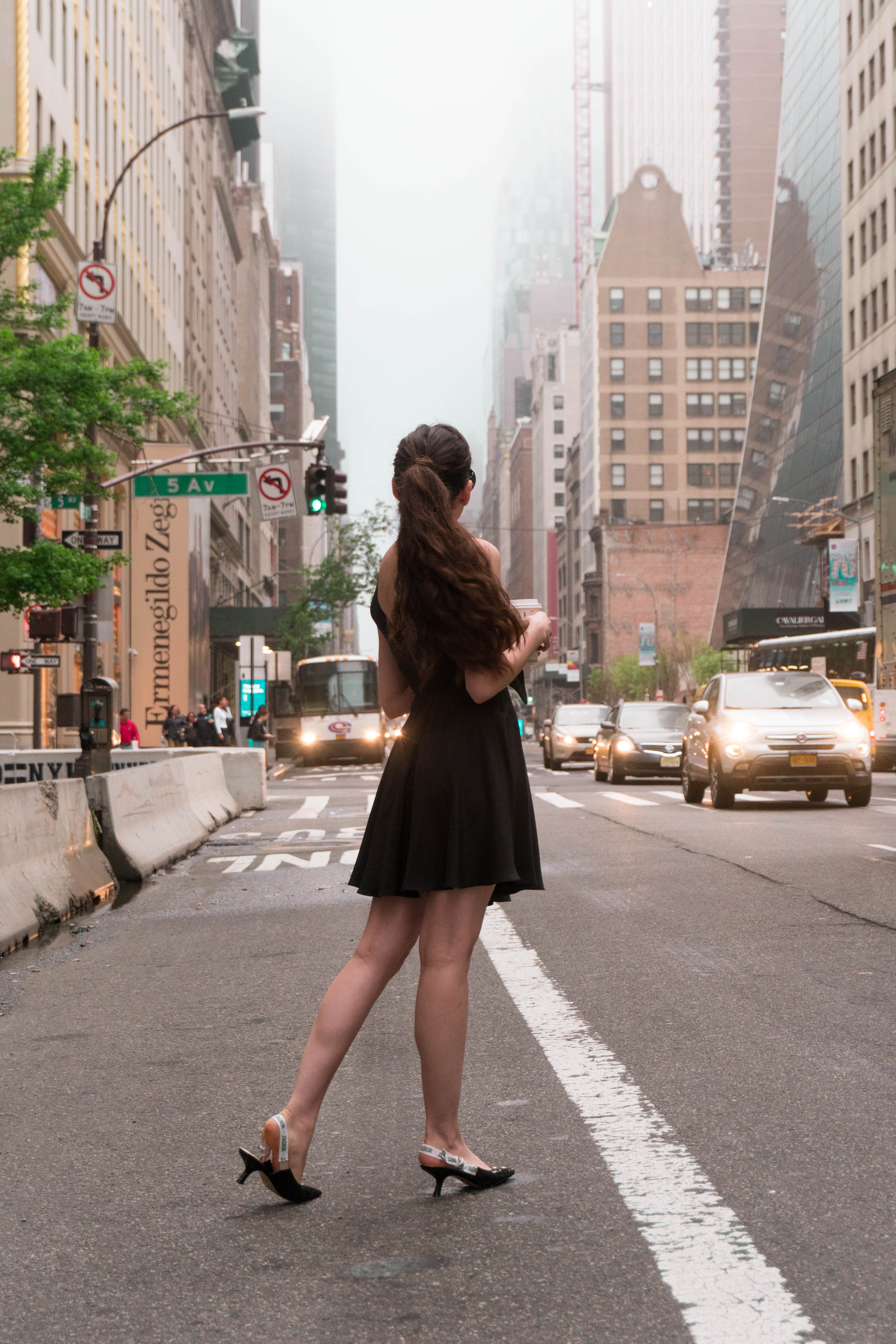 Holly Golightly is the embodiment of Manhattan, and Amanda Uprichard is a brand that could hardly be more effortlessly glamorous New York. It’s a match made in heaven, I thought to myself. I wanted to bring Holly’s style into the 21st century, but I also wanted to make it wearable.

So I described my slightly out there, probably going to be a trainwreck to execute, idea, to two of the most creative people I know, Adrian Agresti, and Yaron Erkin. Adrian, also being a fan of the movie, and Yaron, somehow having never seen it, were both up for the challenge. We shot this project three months ago, and I’m relatively certain that to this day, Yaron still hasn’t seen the movie {how are we friends}. The three of us set out to style, shoot, film, and edit, an updated Holly Golightly look, and a modern cut of the Breakfast at Tiffany’s opening scene. 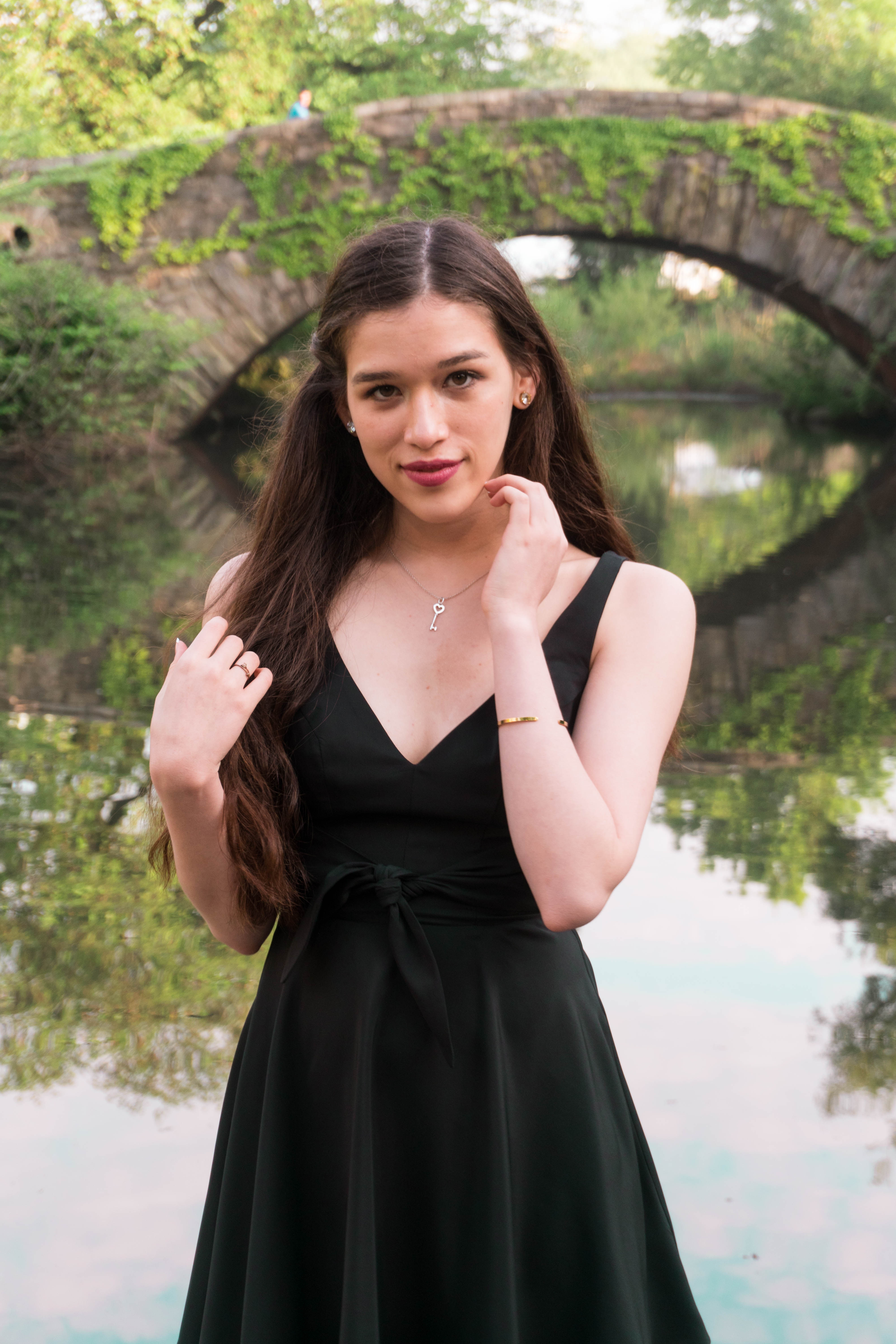 Holly wears big sunglasses for the entirety of the opening scene, and I’m hardly ever seen walking around the city without a pair of mine. This pair has a swirl detail that gives them some interest and a little trendier. 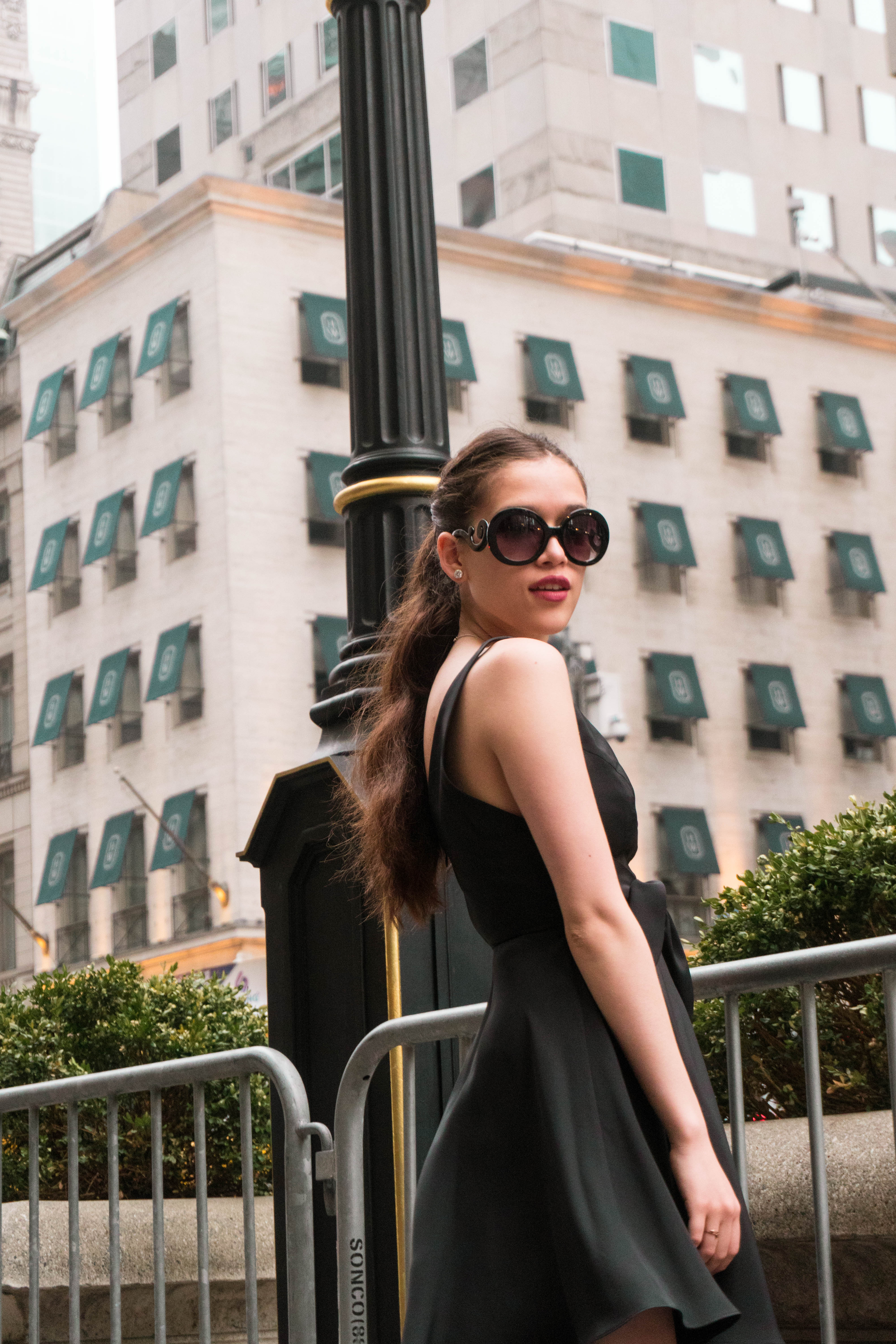 We woke up at the crack of dawn {ahem, 5 am, ahem, my usual bedtime}, and called an Uber up to the flagship Tiffany’s where the movie was shot. Fun fact: the taxi Audrey steps out of that very first scene, is driving the wrong way down 5th Avenue. We learned this the hard way when we wanted to recreate this shot and couldn’t because of the direction traffic flows on Fifth in real life. Then there was the guy doing his job blasting the sidewalk with water and me trying not to step in the giant puddles accumulating on the road to get the shot. The shoot itself was entirely unglamorous, but Adrian worked his video editing magic and managed to make it look just the opposite.

I did actually search high and low for a toned down tiara-esque hair comb or piece that I could use for this look, but came up empty ended after hours of searching. I eventually just came to the conclusion that meant Holly wouldn’t be wearing one today, which is probably correct. I think the only New Yorker I’ve seen wearing something sparkly in their hair is Miss New York. Even the Statue of Liberty’s crown isn’t sparkly. 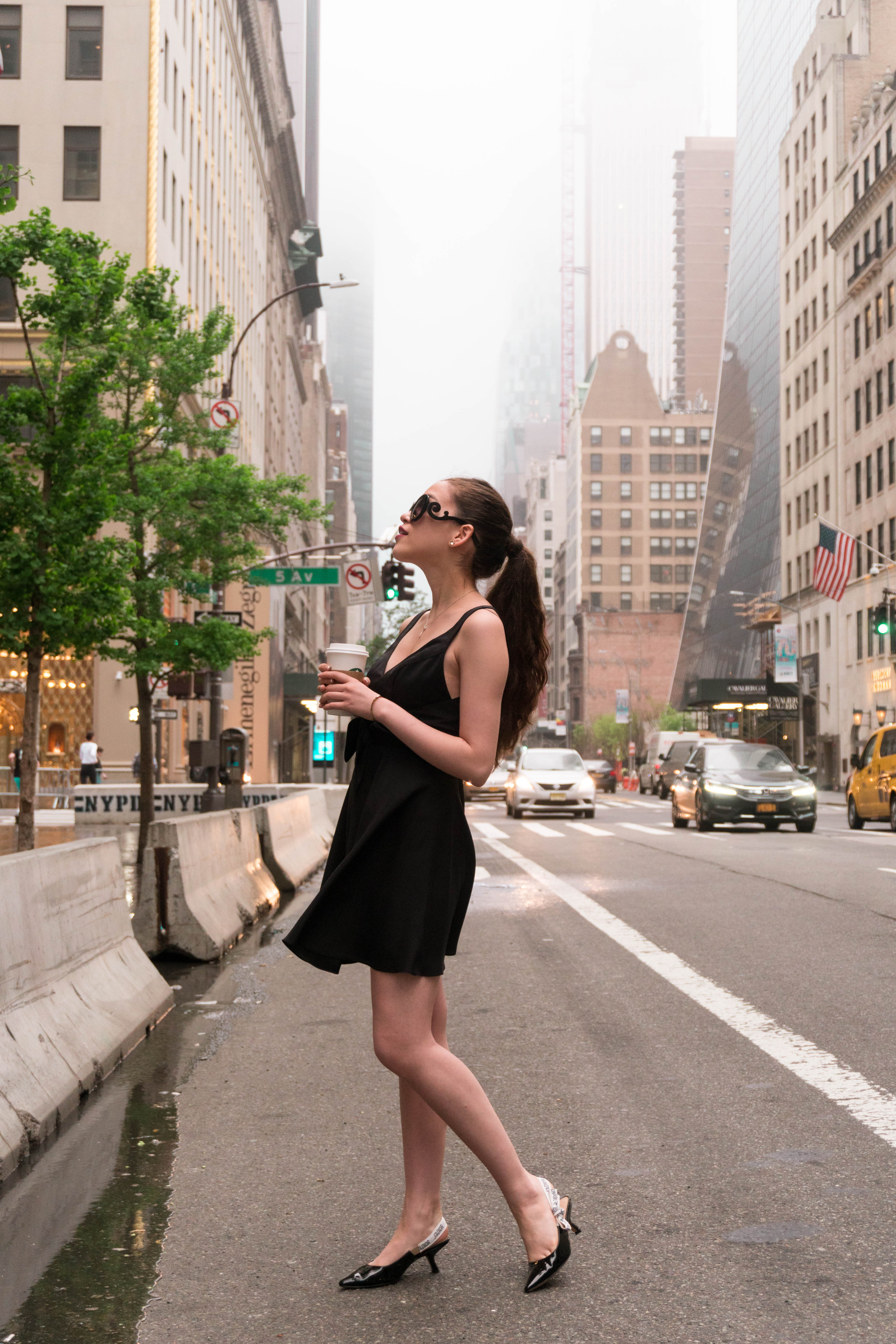 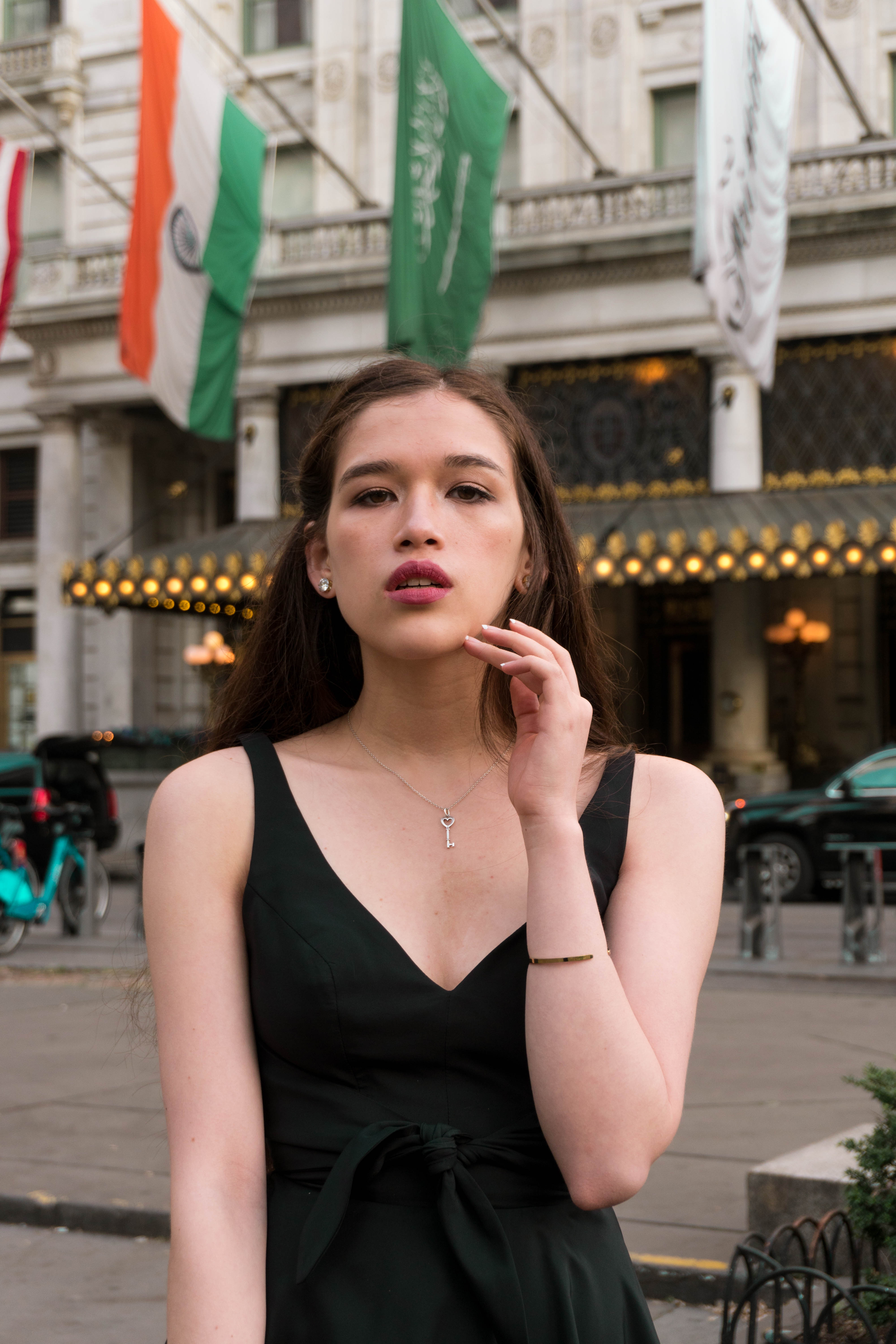 Just daydreaming about being Eloise outside of the Plaza Hotel. Don’t mind me.

{A brief note: Central Park at 6 am is something magical. It’s beyond gorgeous and made getting up this early worth every moment.}

Holly had one of the classic New York cups for her coffee. I’ve never tried coffee and I have no idea where to find a coffee shop or bodega with those cups in the city, so I opted for a soy chai tea latte from Starbucks instead. I would’ve gone for one of my spots in the city, The Bean, but it was so early that even they weren’t open. Then again, they’re also one of my favorite spots because The Bean stays open until midnight. So there’s that. I try not to have my photo taken mid-bite, but I’m not fast enough to escape Yaron’s shutter, evidently. 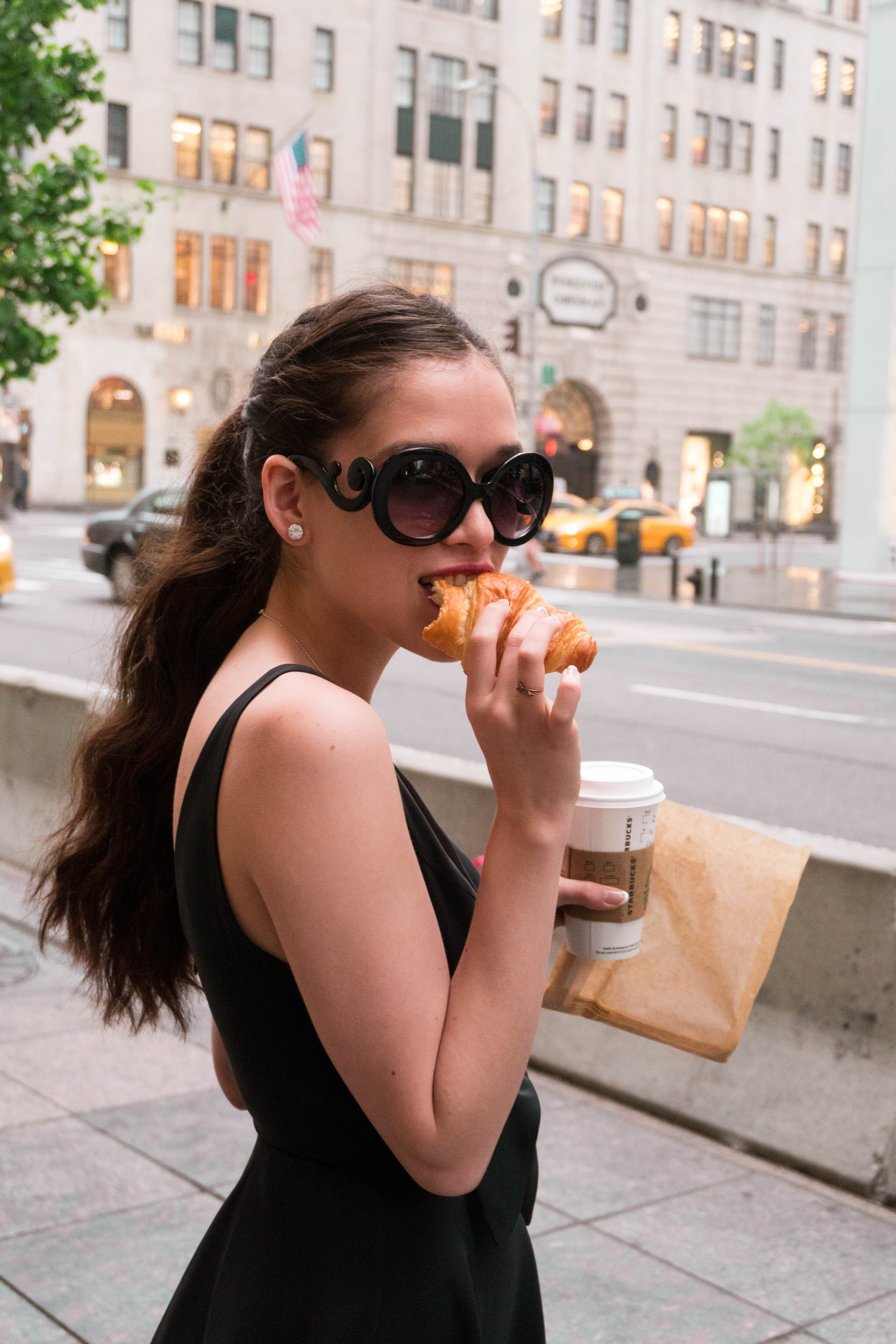 So here it is. Three months later, one updated Holly Golightly look, and one remade opening scene from Breakfast at Tiffany’s. I’ll always love the original, but being able to do this was one of my most ambitious projects yet, and I couldn’t have been more grateful to have two talented people with me to make it happen.

A Modern Breakfast at Tiffany’s

Enjoy this post? Please pin it to save it for inspiration later!