Going to college in NYC, I’ve had my fair share of pizza slices at 4am. Let me tell you, here’s nothing like the need to find food that isn’t IHOP at 12am for a long night of studying. Spoiler: Don’t go to IHOP in NYC. Tried that once. Never again. I’m sharing my tried and true inexpensive late night bites in NYC with you, perfect whether you’re just visiting or a New York local. Trust me, all of these are much better than your regular 24 hour chain restaurant.

Several locations in NYC. I usually go to the one on 14th St between 1st and 2nd Ave.

Artichoke Pizza is the best pizza in NYC. Fight me. My friends have gotten into debates over Artichoke vs. Joe’s Pizza on more occasions than I think we’d all like to admit, but Artichoke is the winner for me because their namesake slice, the Artichoke slice, is truly unique. Inspired by artichoke dip, it’s creamy and all sorts of cheesy goodness. The crust is thick to handle the weight of the pizza, and slices are so big that I normally only eat half and save the rest for later! If thick crust isn’t your thing, you’ll much prefer Joe’s. Artichoke is open until 5 am on weekdays, and 6 am on weekends. Yes, I’ve been to Artichoke at 5 am, and yes, I’ve ordered Artichoke on Postmates despite it being just around the corner from where I last lived in NYC. Artichoke Pizza on 14th doesn’t have any seating, so plan to stand or take your slice to go. Artichoke Pizza is cash only, but they’re on almost every food delivery service in NYC, allowing you to pay by card instead. I’ve found that on Postmates and Uber Eats, delivery is typically free for Artichoke Pizza. Tip: don’t go at 2 am on a weekend. The line will curve around the entire restaurant and you’ll be waiting forever. Go earlier or wait about an hour and a half and miss the line! 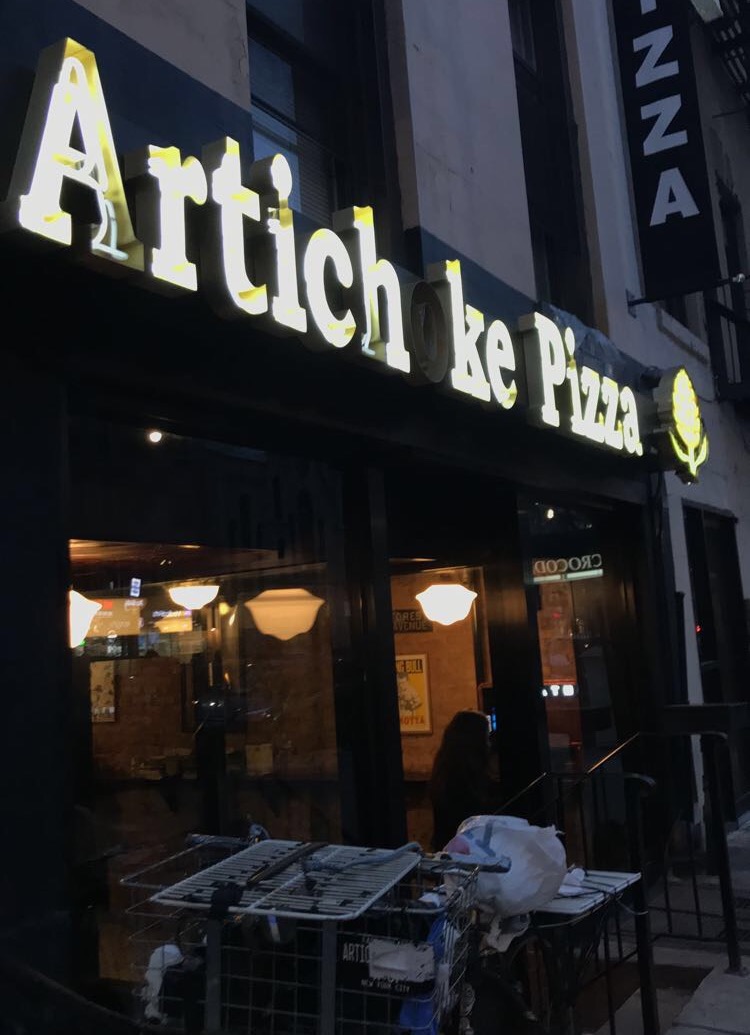 Several locations across the city. I frequent the 14th St and 3rd Ave location.

Artichoke may be my pick for best pizza in NYC, but Joe’s has my cheese pizza slice of choice. Unlike at Artichoke, at Joe’s you can pay with a credit card, so long as you meet their $5 minimum. A slice of pizza and a sparkling juice will get you just over it. Joe’s describes itself as “no nonsense pizza,” which is exactly what it is. Slices here are generously sized, and the epitome of New York style pizza: thin crust, cheese almost dripping off the sides. Joe’s is open until 4 am on weekdays, and stays so busy that there’s almost a line out the door. Joe’s does have seating, giving you the option to dine in.

For dumplings in the city, Vanessa’s is almost as inexpensive as you can get. Example: vegetable dumplings are only $2.49 for four pieces pan fried, or $5.99 for eight pieces boiled. Vanessa’s is open until 10:30 daily, closing earlier than other spots on this list, however later than some of its low cost dumpling house competitors, such as Di Di Dumpling, which only stays open until 9.

Several locations. My choice is 13th between 2nd and 3rd Ave.

After being featured in my New York Sweet Spots guide, it’s no secret that I love me some Momofuku Milk Bar. Created in 2008 by chef Christina Tossi, Milk Bar is known for their unique take on birthday cake, their crack pies, and of course, their cereal milk soft serve. Milk Bar stays open until 12 am on weekdays, and 1 am on weekends. Read more about Milk Bar in my guide here.

Seven locations in NYC. I prefer the 7th St and 2nd Ave location.

Another NYC Sweet Spots pick, Van Leeuwen is not only one of the top ice cream shops in New York City, but THE late night ice cream spot in the East Village. I’ve been to Van Leeuwen at 11 pm and there’s been a line spanning down the block on 7th St just for their ice cream. Why? Van Leeuwen is known for their experimental and different flavors such as Passion Fruit Layer Cake and Earl Grey Tea. On top of that, Van Leeuwen also has a range of vegan ice cream, in just as interesting flavors. The East Village location is open until midnight daily. 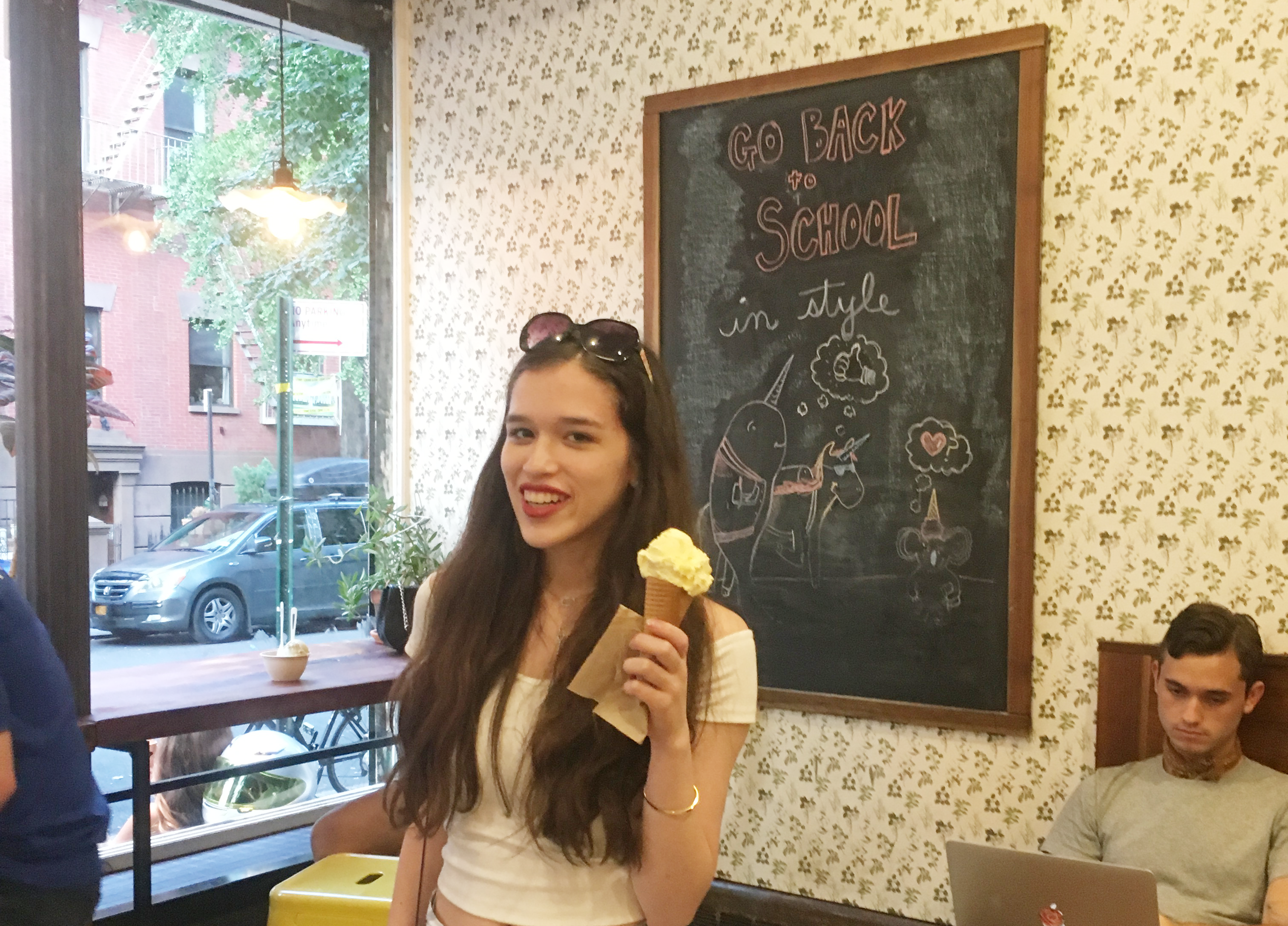 I can’t say enough good things about this East Village spot. San Marzano’s $9 fresh pasta is better than a lot of the pasta I’ve had at higher end Italian restaurants in the city {the ever so Instagrammable Pietro Nolita, I’m looking at you}. Plan strategically when visiting, San Marzano’s pasta secret is out in the city, and wait times can be up to 1.5 hours for dinner on the weekends. Reservations are accepted, but only for parties of six or more. When I was living in the East Village, I called ahead and grabbed takeaway on more than one occasion. San Marzano is open until 11 pm on weekdays, and 12 am on weekends.

The Halal Guys started out as a cart on 53rd and 6th Ave, but has grown into a NYC staple in terms of Halal food. The Halal Guys refers to themselves as the “pioneers of American Halal food.” I don’t know if I’d go that far, but I will say that they’re the one street food cart I’d actually trust to buy food from. The 14th St location isn’t a cart, but a storefront, and stays open until 4 am on weekdays, and 5 am on weekends.

Mamoun’s and the Halal Guys are similar, but I prefer Mamoun’s. In my opinion, Mamoun’s menu for vegetarian options is much stronger compared to the Halal Guys. Just like Joe’s and Artichoke, my friends and I have also gotten into debates on Mamoun’s vs. Halal Guys, every time ending in a draw between the two. If you’re going to Mamoun’s get the fries, you’ll thank me later. Mamoun’s is open until 12 am on Sundays, 1 am on weekdays, 3 am on Thursdays, and 4 am on weekends in the East Village. Their MacDougal Street location remains open until 5 am.

Several locations. My favorite is 9th St and 3rd Ave.

The Bean is a late night coffee shop, and the go-to spot for NYU and New School students alike. One of my favorite chai tea lattes in the City, and made even better given that the Bean is open until 12 am daily. You can find me and every other college student in NYC here during finals, studying away. Unlike your local Starbucks, the Bean has comparatively good food options, serving everything from peanut butter blondies to açai bowls. Read more about The Bean in this post.

Is Famous Ben’s my favorite pizza in NYC? No, but it still makes the list for their notable baked ziti pizza. As a pasta connoisseur and ziti lover, stumbling upon this SoHo spot was the best possible scenario. That’s right, actual ziti pasta on top of a pizza. Famous Ben’s is also the location where Lil Yachty hosted “Yachty’s Pizzeria” last year, for the hip hop fans out there. Famous Ben’s is open until 11:30 pm. 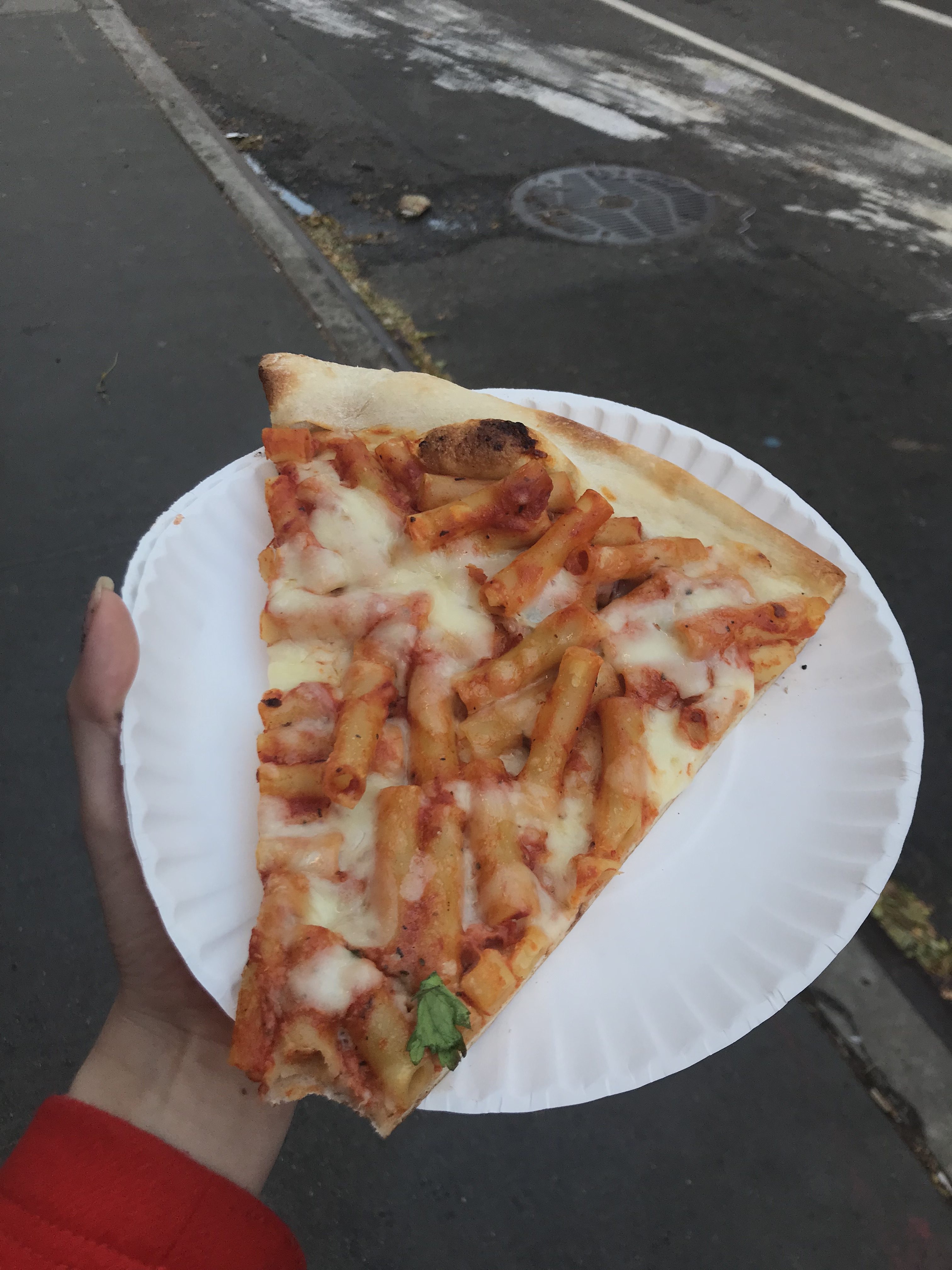 Baohaus is one of my favorite restaurant discoveries in the East Village. For anyone who’s watched the show Fresh Off the Boat on ABC, you’re more familiar with Baohaus than you may think. Fresh Off the Boat is based off the life of chef Eddie Huang, who happens to be the same Eddie Huang that created Baohaus. All of the flavors in these small buns are savory and perfectly balanced, and taste much more expensive than they cost. Baohaus has a bit of a 90’s hip hop throwback vibe to it, making it trendy, funky, and a little edgy. There’s limited seating, so like most of Baohaus’ customers, I typically take my order to go. If you’re there, try the Ai Yu Jelly Lemonade in addition to your bao order. Baohaus is open until 11:30 on weekdays, and 3:30 on weekends.

CURRENTLY IN MY CLOSET

Live in New York or heading to NYC soon? Pin the images below to save this post and add these spots to your NYC food list! 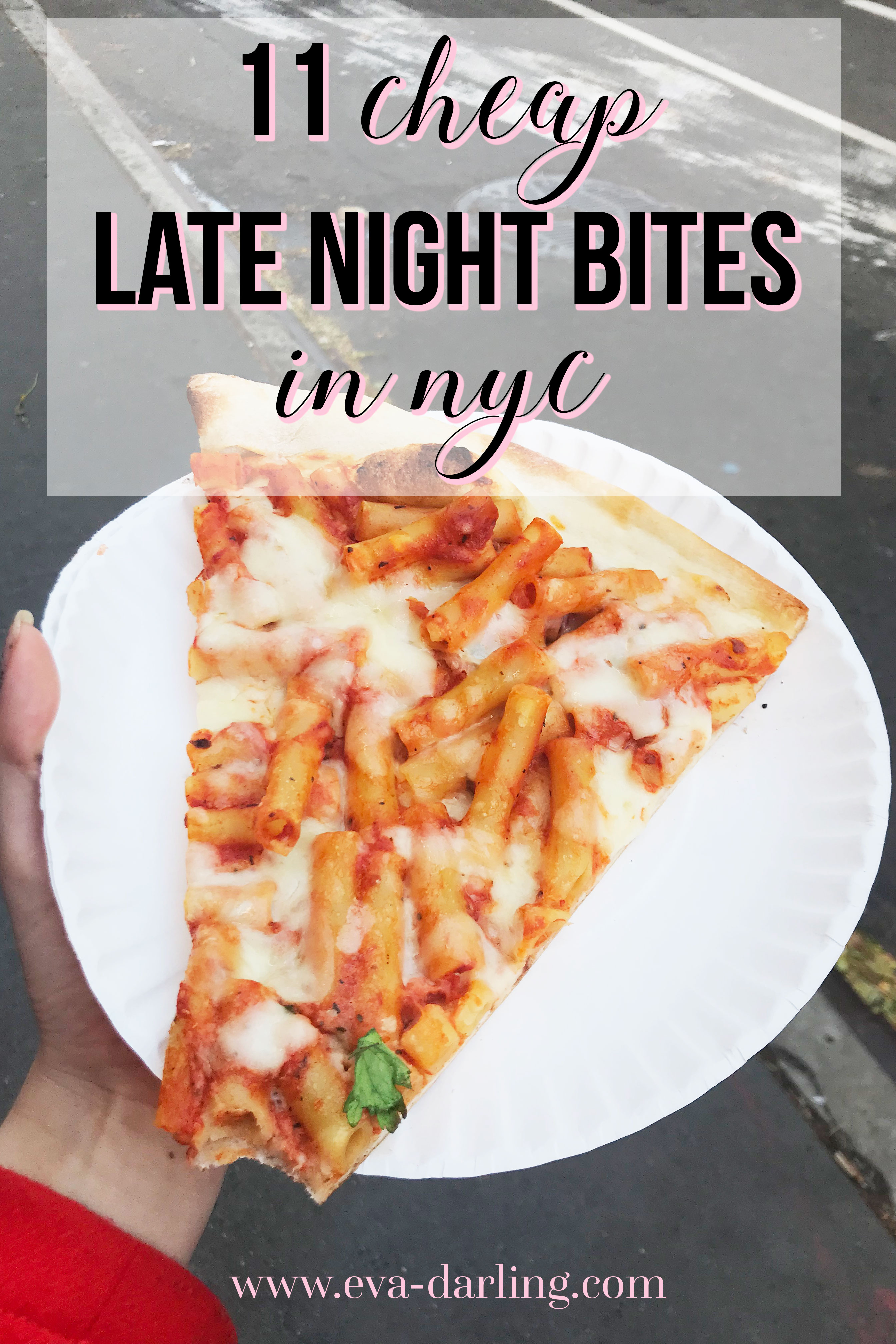 PREVIOUS POST
Styling a Colorful Magenta Trench Coat in SoHo
NEXT POST
4 Ways to Make the Most of Your Small Apartment
6 comments so far.