I’ll admit, Tokyo has never made top 5 on my travel wish list. Honestly, I don’t even think Tokyo made top 10. When I was presented with the opportunity to go, obviously I was excited at the opportunity to go somewhere new, but I also didn’t have a list of spots I’d been dying to go to for years like I did when I first went to New York or Paris. That is, except for Harajuku.

As ridiculous as it sounds, my father introduced me to the music of Gwen Stefani at a very young age, and as a loyal Gwen Stefani fan, it was impossible to ignore her love for Harajuku. After doing my own research into it {including finding out that Harajuku was not just a style, but also a place. I was 10, stop rolling your eyes and give me a little break},  Harajuku quickly caught my eye for its cute, kawaii style, which is exactly why it was the one place in Japan that I just knew I had to go. 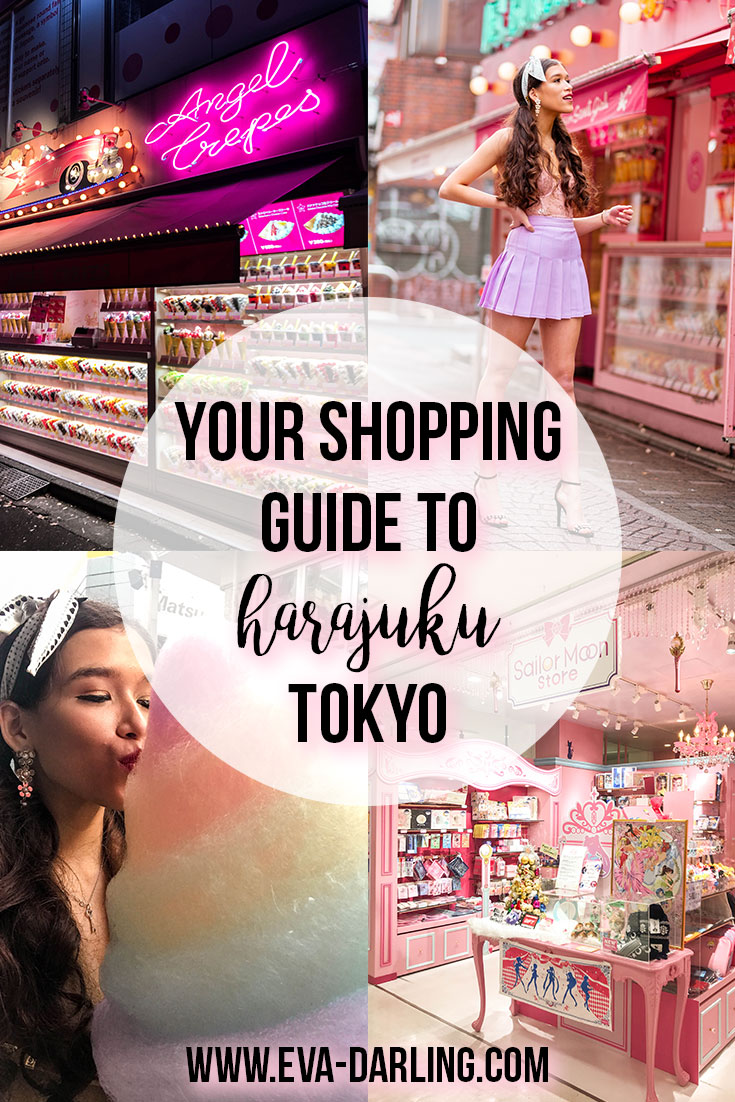 I was right. My girly, pink-obsessed self that’s been slightly bottled up since moving to New York came out in full form. I went down Takeshita Street {the iconic shopping street in Harajuku} on three different occasions at three different times of the day, two of them being when everything was closed, and every single time I had starry heart eyes. I was pretty much a walking emoji the moment I stepped into Takeshita Street. 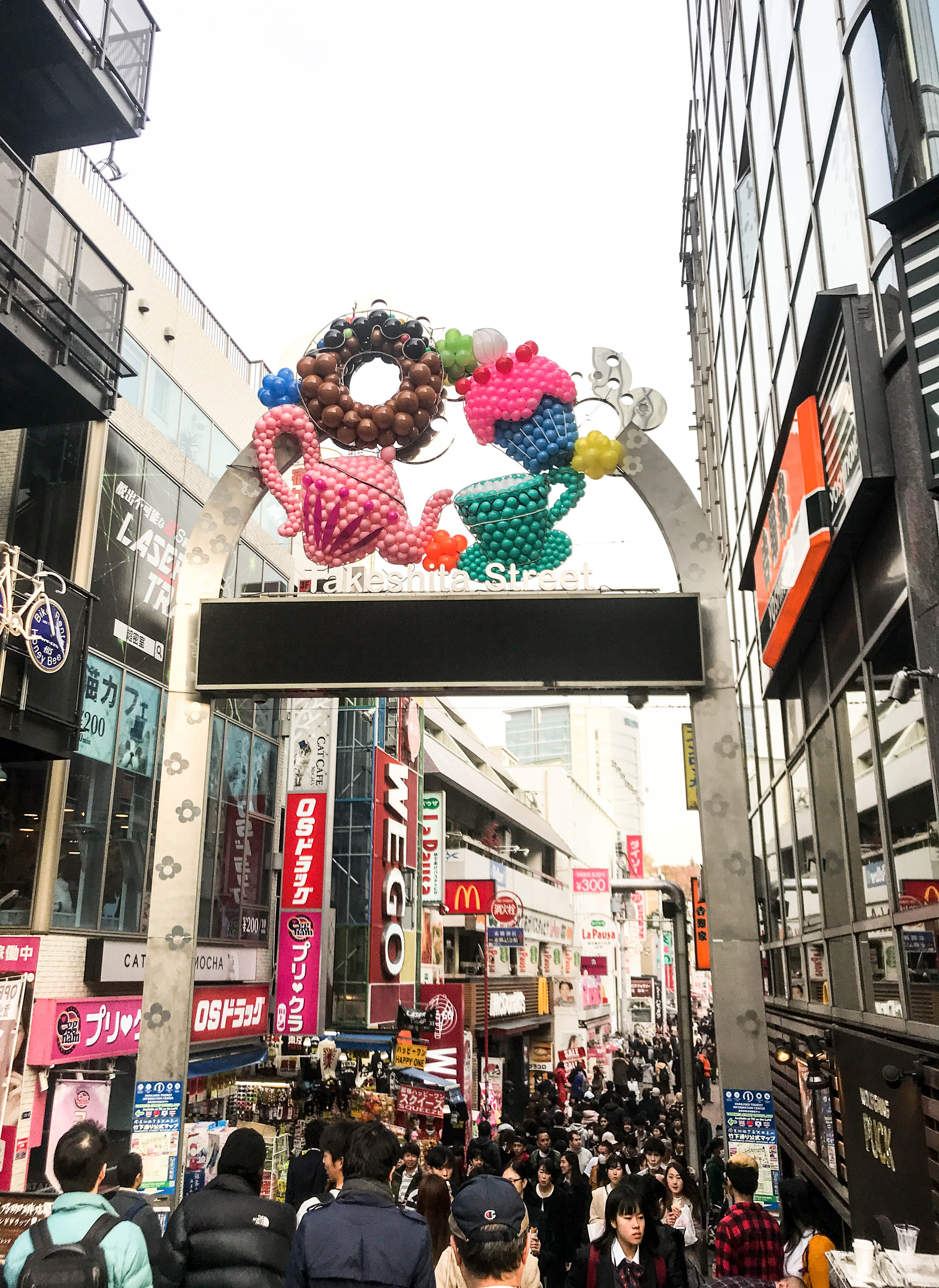 Despite how kawaii Takeshita Street is overall, like any shopping area, upon further inspection I realized one thing: while there’s a lot of amazing stores in Harajuku, there’s a lot of stores that are just entirely not worth your time as well. I spent over two hours walking down a street that would take me five minutes to walk straight down nonstop, to find the best stores and food in Harajuku, just for you.

I went into Laforet on accident…kind of. After receiving a tip from someone that I might like the Japanese clothing brand Lily Brown, I ventured out to find the Lily Brown boutique an hour before it was supposed to close. Stepping out of the train station that was supposed to be just 500 feet from the boutique, I paced around where the boutique was supposed to be at the busy, main intersection in Harajuku for about 10 minutes like my typical, directionally challenged self. Finally I realized that Lily Brown was in fact tucked inside the building behind me, and in turn, meant that it was in the department store Laforet. I could solve a multi-step math equation in 30 seconds or less, but I’m downright illogical when it comes to navigation. 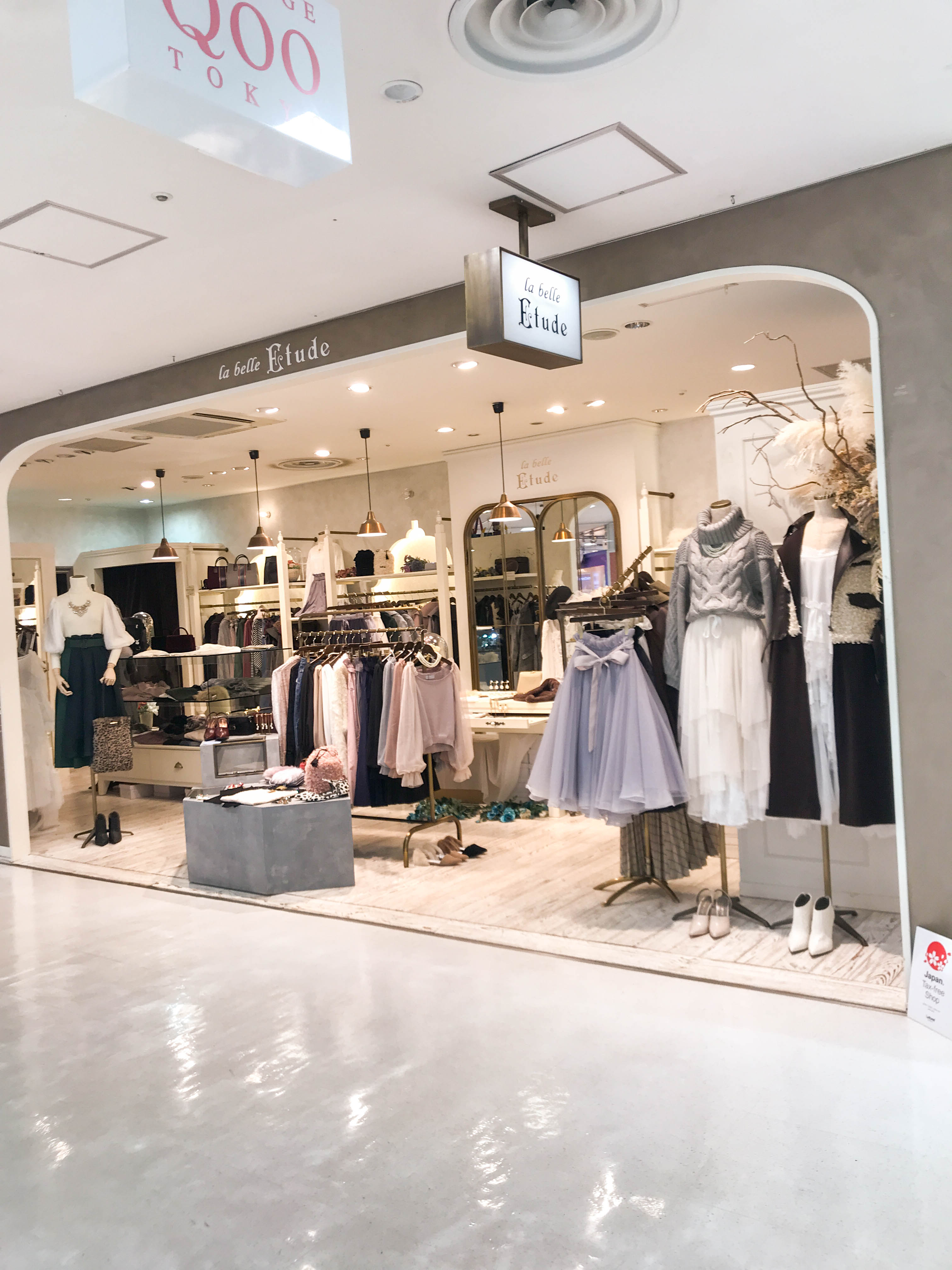 Stepping into Laforet was like stepping into my dream closet. Ruffles, tulle, and downright princess-worthy clothing surrounded me immediately. The entire main floor is just filled with individual boutiques of the prettiest, most feminine things, including Lily Brown. Laforet also has more typical Japanese minimalist chic clothing as well. Some of my favorite boutiques inside of Laforet include Lily Brown {obviously}, La Belle Etude, Vintage Qoo {luxury vintage resale}, and get this – an entire boutique dedicated to Sailor Moon. 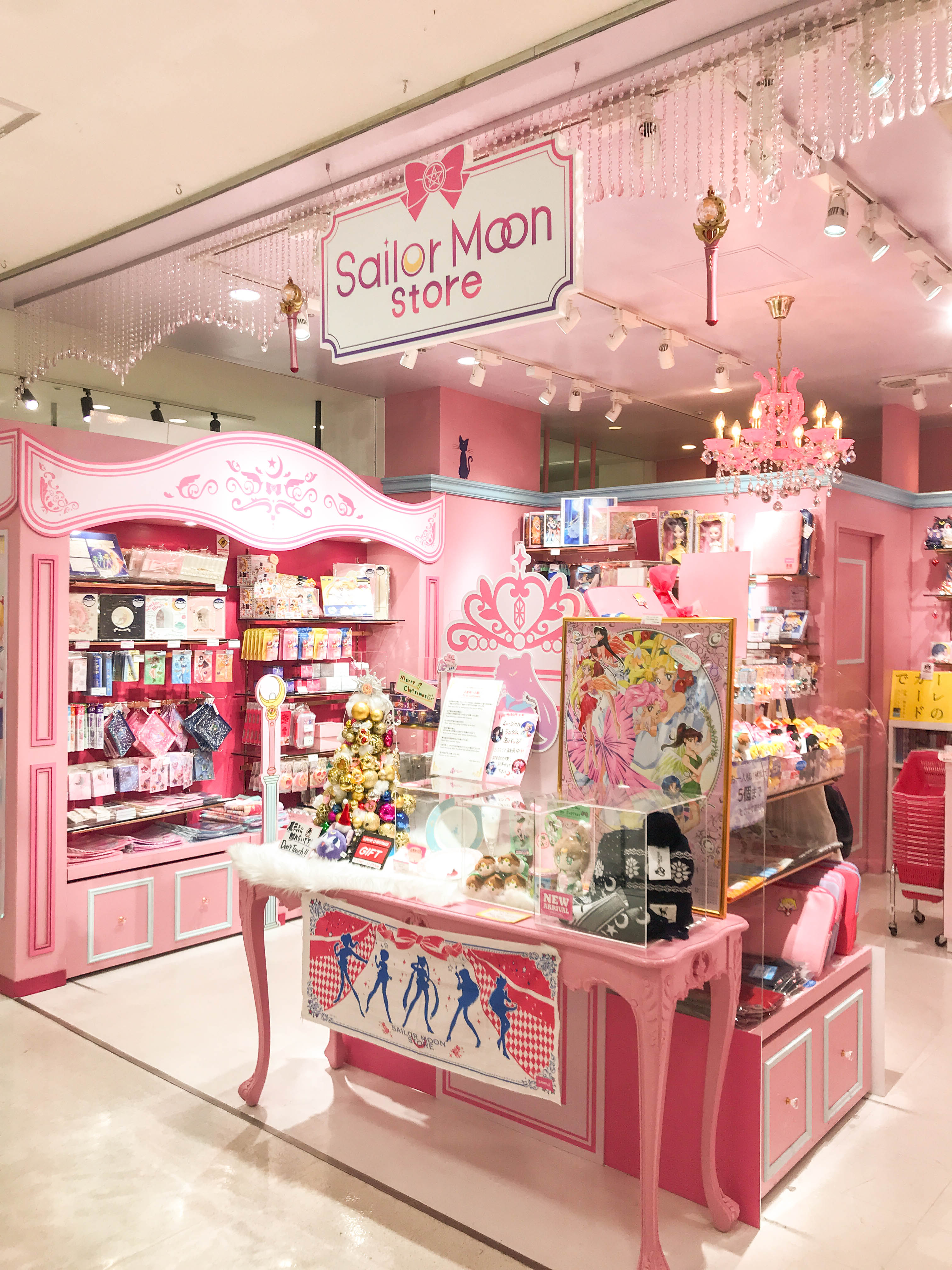 If you’re looking for some girly, kawaii fashion, Liz Lisa is exactly where you should be. Liz Lisa’s innocent style is encapsulates kawaii Japanese fashion in an innocent and modest way. There’s actually two places to purchase Liz Lisa on Takeshita street – their boutique in the department store ALTA, and the standalone Liz Lisa store. I went to both, and cdan say with confidence that the only one worth going to is the standalone store. ALTA as a department store isn’t bad, the boutiques were just nothing special in my opinion, similar to what we have here in the States, and has a much smaller collection than the main store. Liz Lisa has reasonable prices and was running some great sales while I was there. There were so many things I would’ve bought in an instant, but unfortunately everything seemed to be just a little too big on me. If you’re looking for a real bargain, the Liz Lisa standalone store also has an outlet store located directly above it, accessible by an outdoor staircase on Takeshita Street. If you’re outside of Japan but still looking to shop their clothing, they have an official eBay store here.

I was so excited to go to WC on Takeshita Street after hearing from several other websites how awesome and affordable their clothing was. Actually stepping into the store, I’ll admit, I was a little disappointed.  It’s definitely overhyped, but still a fun store! Think slightly better than H&M quality at Zara prices. Although personally, WC didn’t have much I was interested in, I do think it’s worth a go, especially if you’re into throwback ’90s fashion. WC has a second floor with an amazing selection of vintage clothing, mostly from American designers such as Ralph Lauren and Levi’s. If you’re not from or living in the States, it’s great, but if you live in the States, you may find that their vintage selection is a bit overpriced for the designers offered. 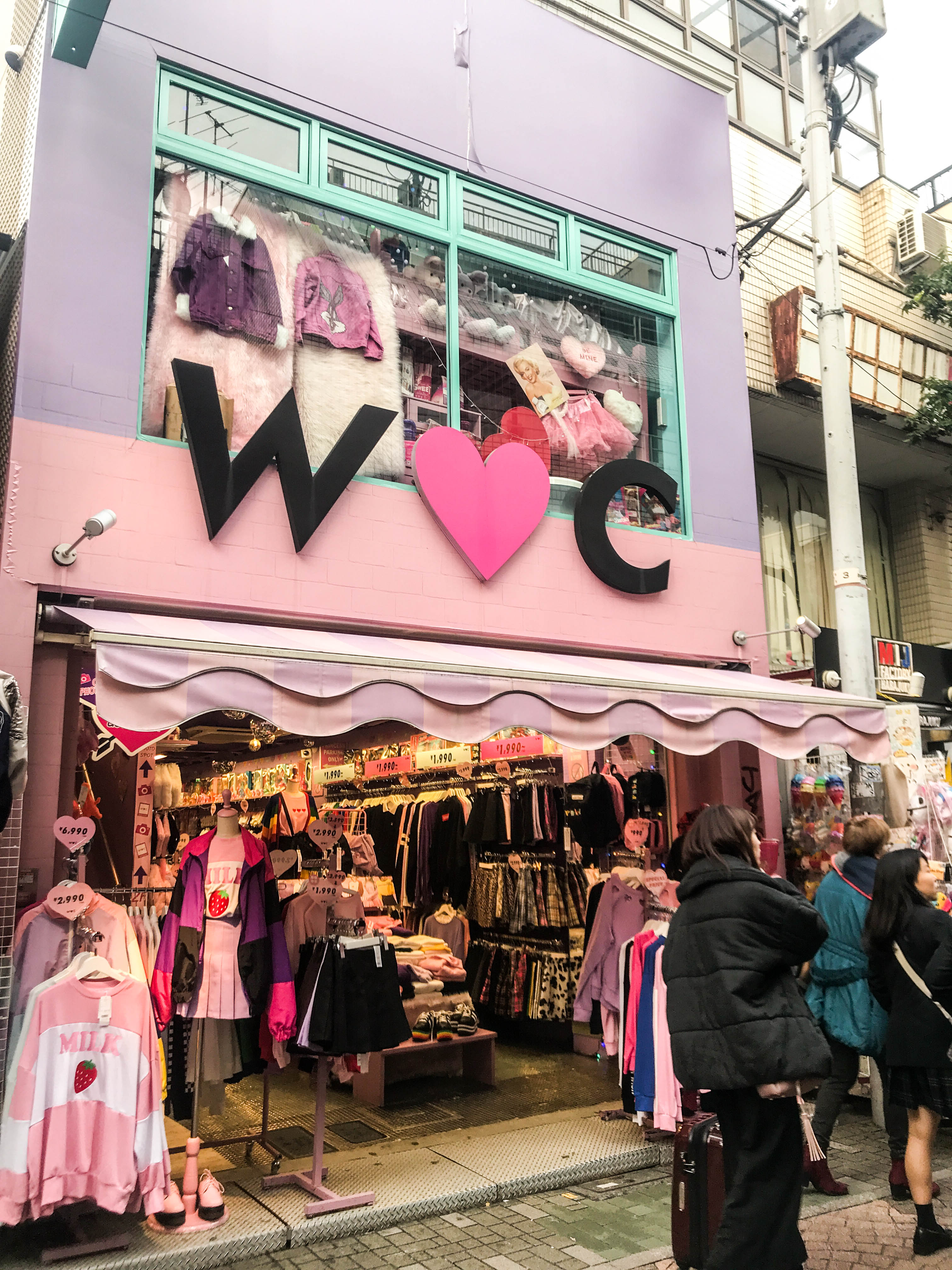 Chicago is tucked away in an alley across the street from Takeshita street, but absolutely worth the walk over. Japan is known for its bustling vintage and resale scene, and Chicago is one of the best. Chicago boasts inexpensive, truly vintage pieces, mostly from the 1970s-90s. My favorite find? A rare, small batch produced, vintage silk Chanel scarf for just $60. Also notable were the array of vintage Burberry and Balmain square scarves ranging from $30-$45. Chicago also has a gorgeous array of beautiful vintage silk kimonos and obi belts, many  just $30-$70.

If you happen to venture over to Chicago, there are several other vintage and resale stores if you wander down the little alleyways, specializing in everything from hypebeast brands such as Supreme, BAPE, KITH, and Palace, as well as more traditional vintage offerings.

If you’re looking for Lolita-esque cosplay, BODYLINE is exactly where you need to be. I walked in expected to be greeted by notorious high price tags, however was pleasantly surprised to see that BODYLINE offers high quality, adorable, unique costumes at Target prices. If Halloween wasn’t for almost another year, I definitely would’ve bought two or three. Their Lolita take on Alice in Wonderland was among my favorites. 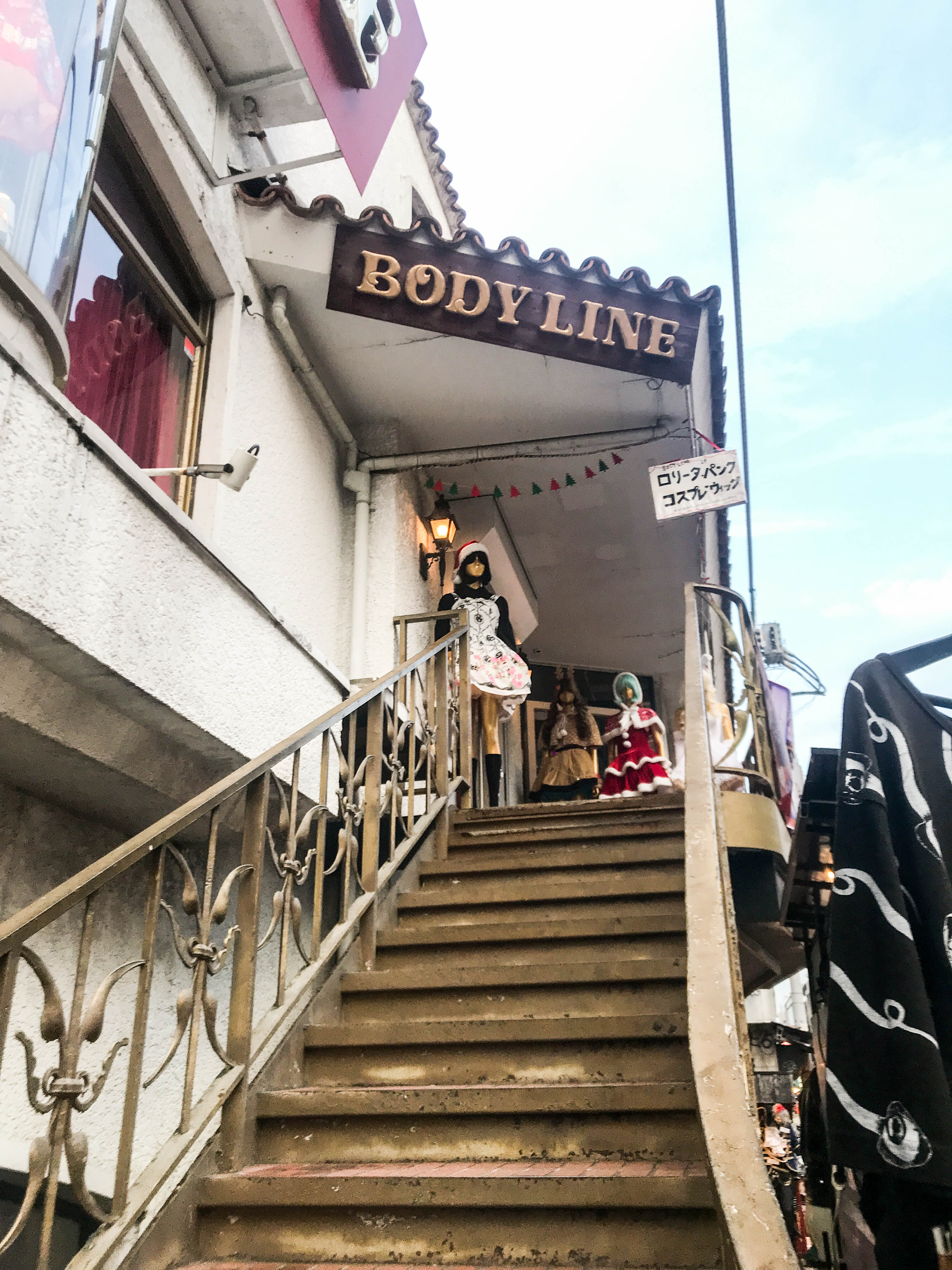 In my opinion, accessories are really one of the best things Harajuku has to offer. With an overwhelming amount of them, even at Laforet, I didn’t see any costume jewelry over $50, with the exception of Chanel. PARIS KID’S was such a fun place to wander into, and was difficult not to go crazy in! The whole store was on sale, and just 300 Japanese Yen {roughly $2.64 USD}. If you don’t have pierced ears, PARIS KID’S will be your personal paradise, as almost all of their earrings are clip-ons instead of pierced. I don’t love clip earrings, so this was a little disappointing as most of the novelty earrings were clip on, however they still had a ton of cute options for pierced earrings as well. I picked up a couple of fun things for my younger sisters, who I know would’ve easily spent an hour in the small store. 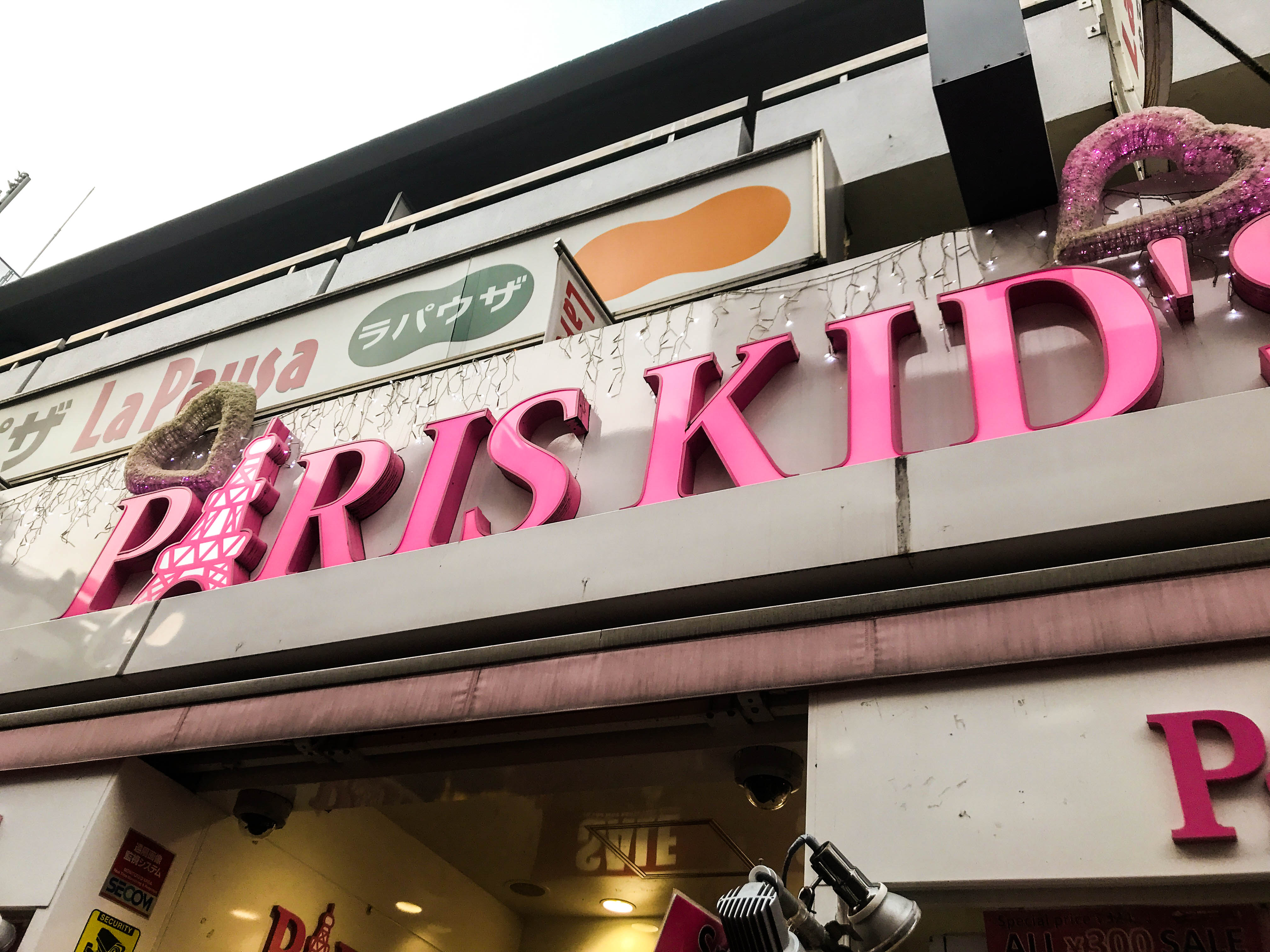 I initially skipped over WEGO when walking down Takeshita Street because at first glance it just looked like H&M or something similar, but on my way back, figured “why not?” Wow, was I wrong. WEGO is like H&M, if H&M was kawaii and carried Japanese street style. While WEGO does carry both men’s and women’s clothing, I’m putting it in the accessories category because honestly, that’s what makes it so special. Like PARIS KID’S, the accessories and home decor at WEGO are all very inexpensive. They’re also quirky and unique. WEGO definitely specializes in the kawaii novelty pieces Harajuku is known for, and everything is so inexpensive that it’s tempting to buy it all. Want something to remember the many {many} crêpes on Takeshita Street? WEGO has you covered with their crêpe keychains for just 300 yen. 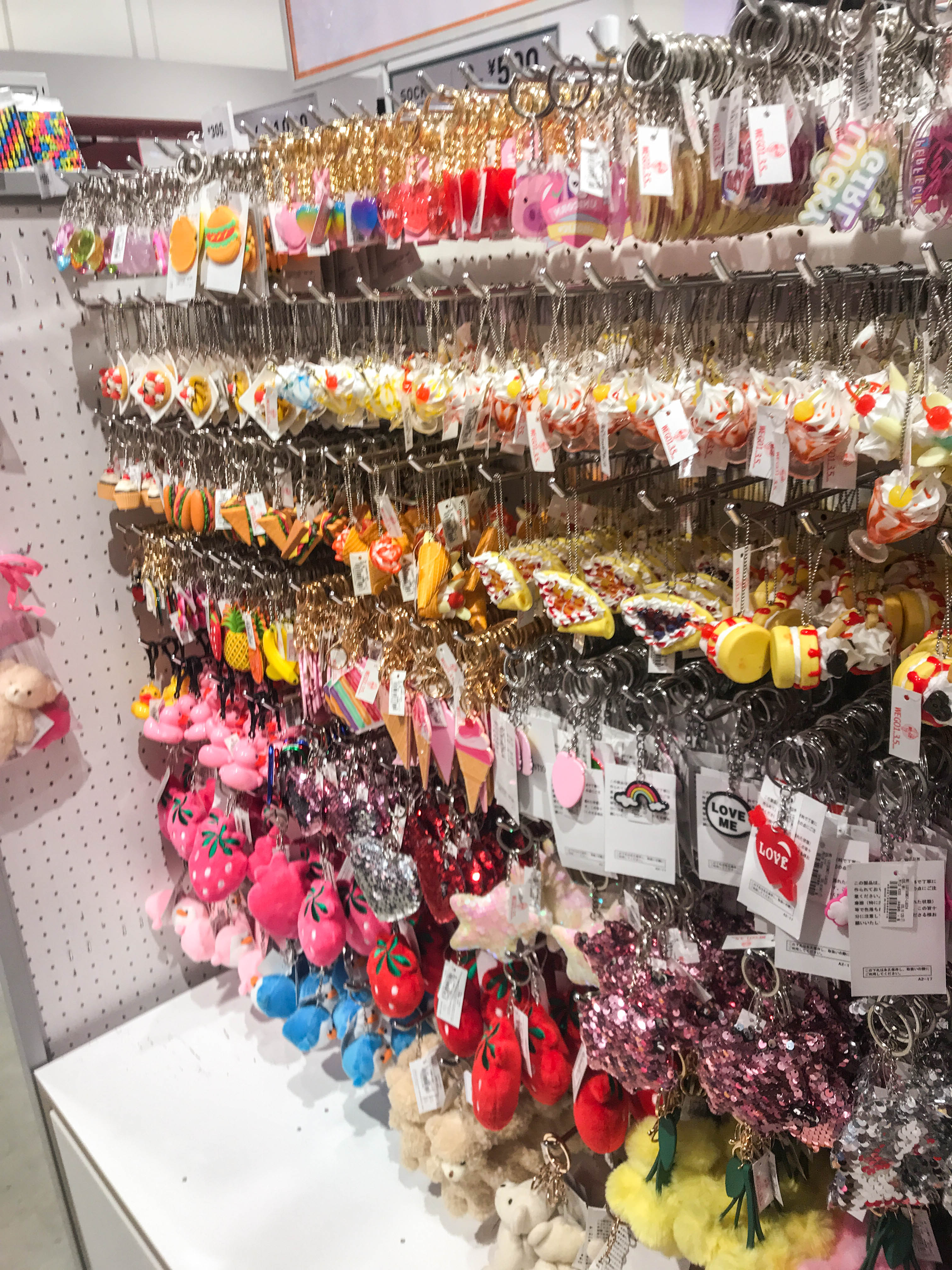 As far as I’m concerned, there’s exactly two types of food you absolutely must try in Harajuku, and crêpes are definitely the number 1. Crêpe spots absolutely rule Takeshita Street. While there are a few different options, Santa Monica Crepes, Angel Heart, and Marion Crepes are definitely the two most popular. Of everyone I talked to who has been to Japan, Santa Monica Crepes reigned superior, so that’s what I went for. I had tried a novelty crêpe place with a similar concept back in NYC, that didn’t make the crepe properly, so I was hesitant to try these, but I really shouldn’t have been. Apart from my uncle’s crêpe making abilities, Santa Monica Crepes had the closest crêpe to the crêpes I had in Paris. That being said, crêpes in Harajuku are almost an entirely different dish, as they are really more of a snack/dessert/street food than they are breakfast or lunch. Santa Monica Crepes is so popular, that there’s actually one large location at the corner of Takeshita Street, and another smaller location about halfway down. Keep in mind, Takeshita Street isn’t very long! Crepe stands are really just that busy. Stacked with sugary toppings and decadent as ever, crêpes are an absolute must. Most crêpes are very affordable and range from 300-450 yen. 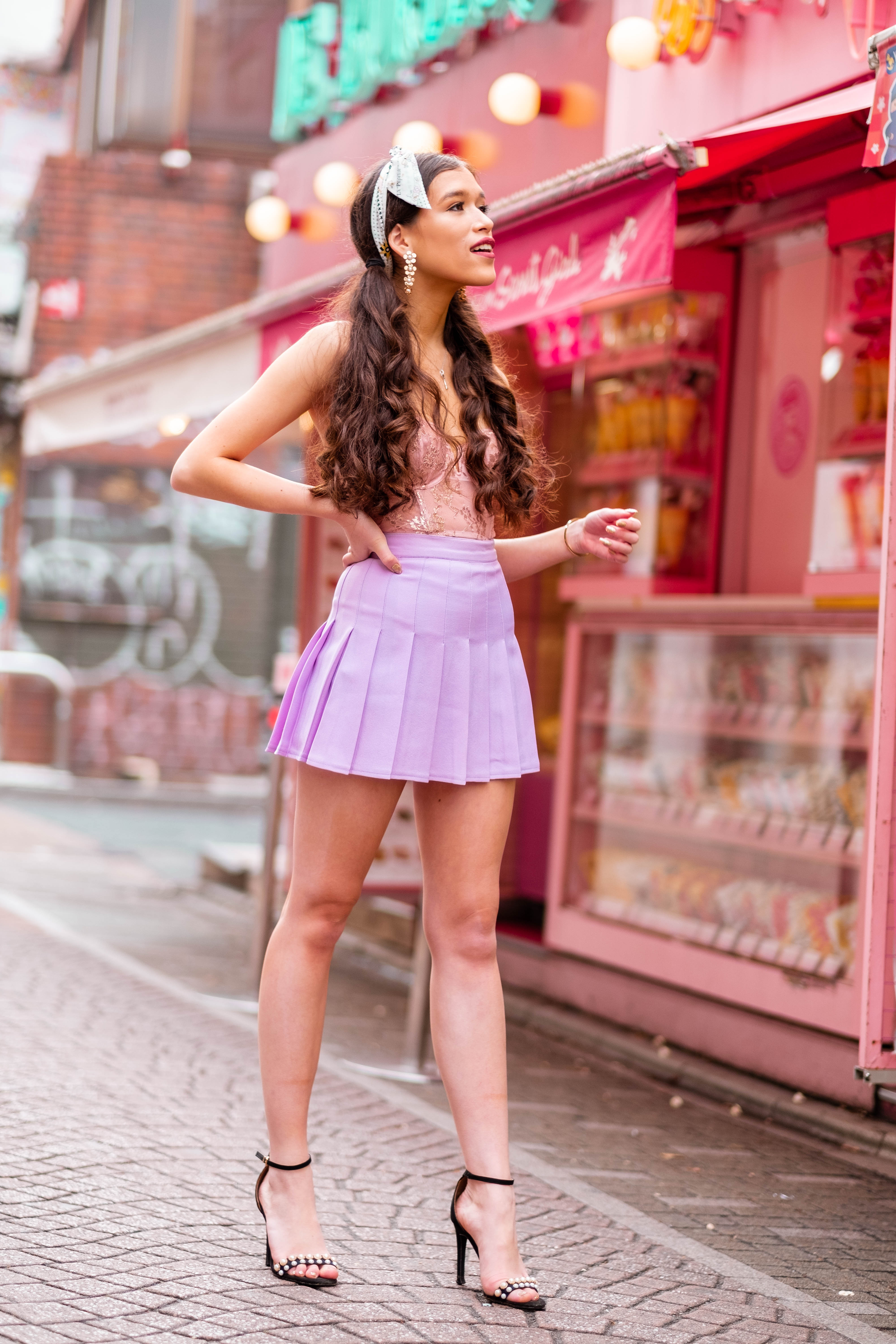 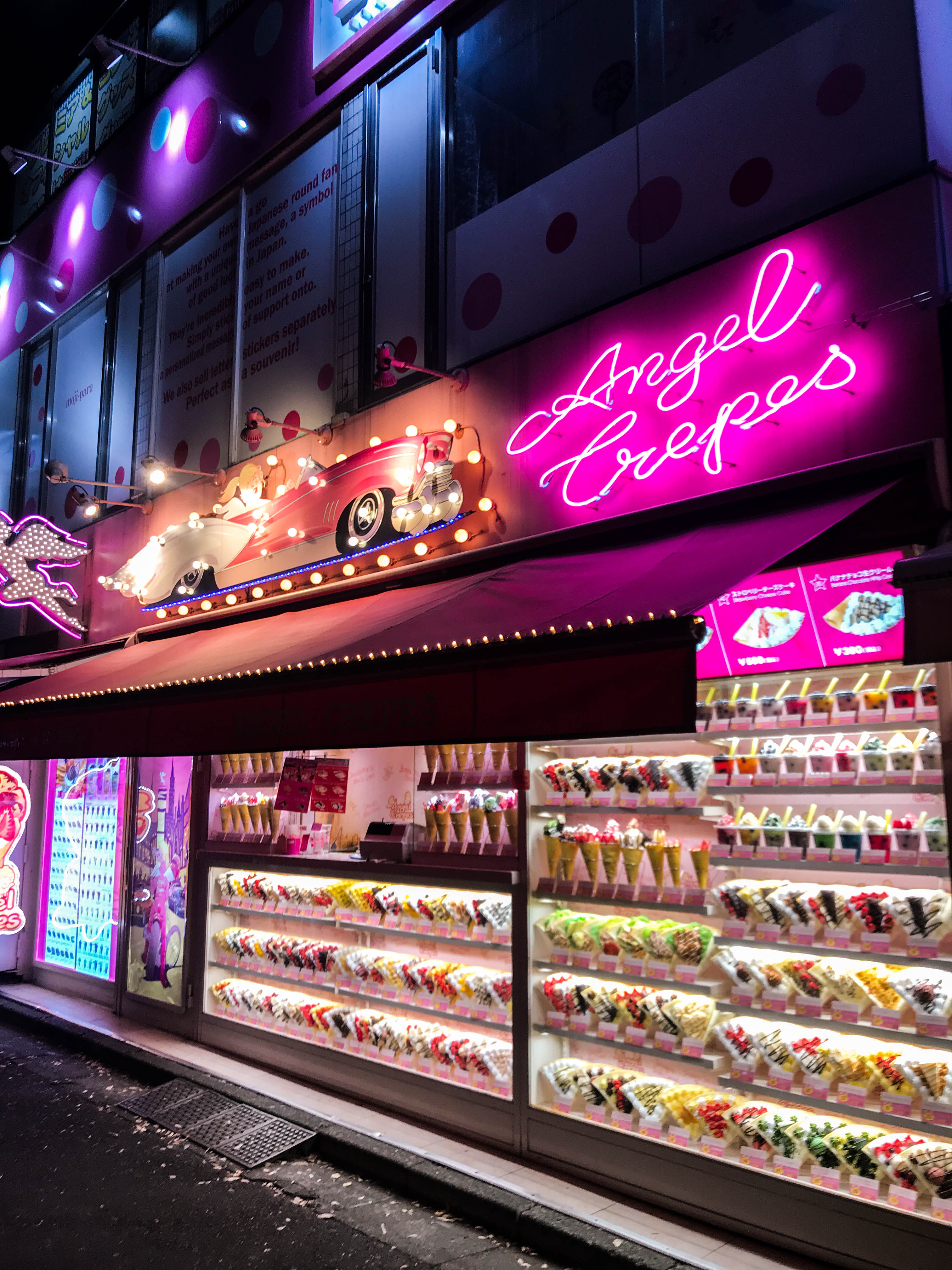 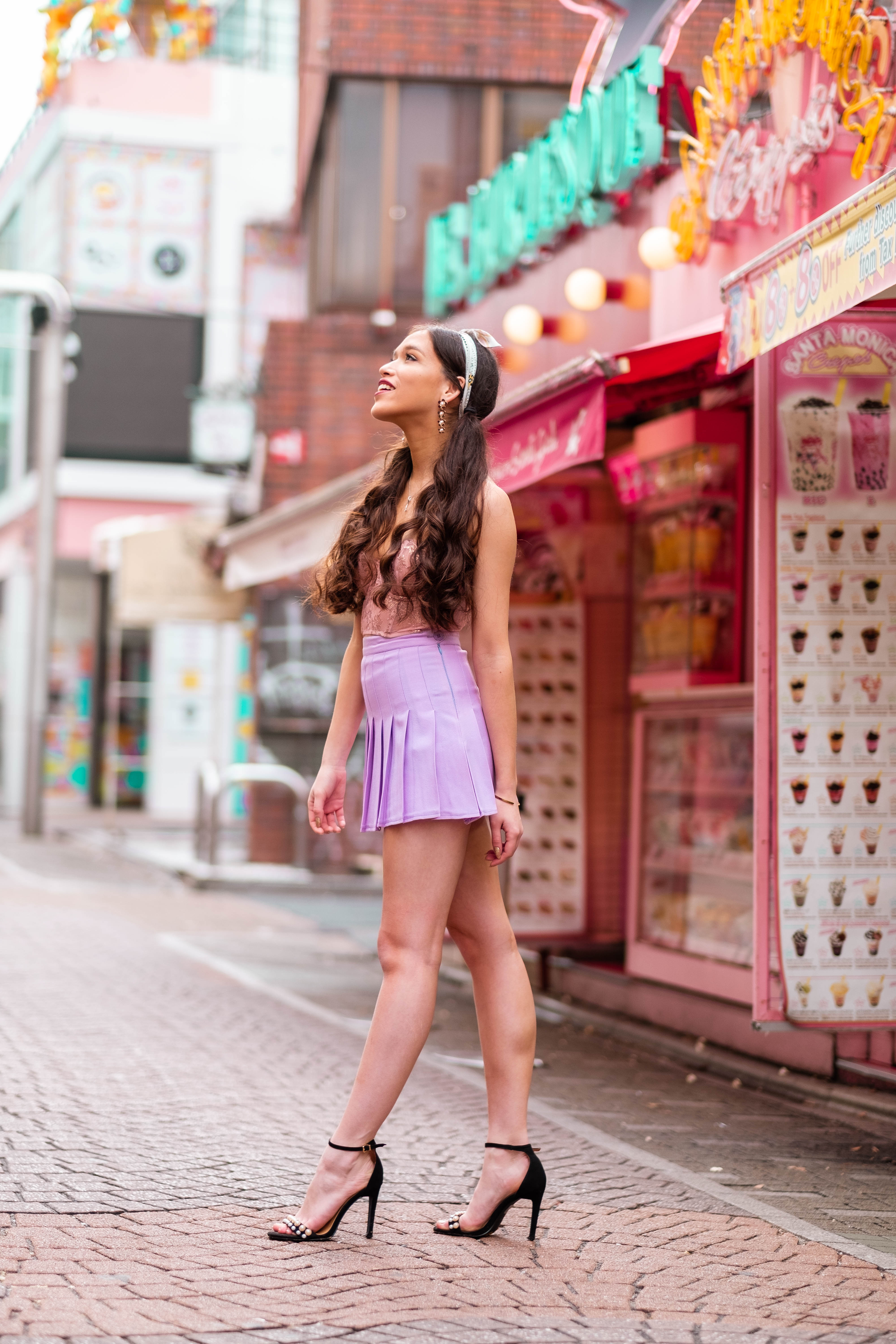 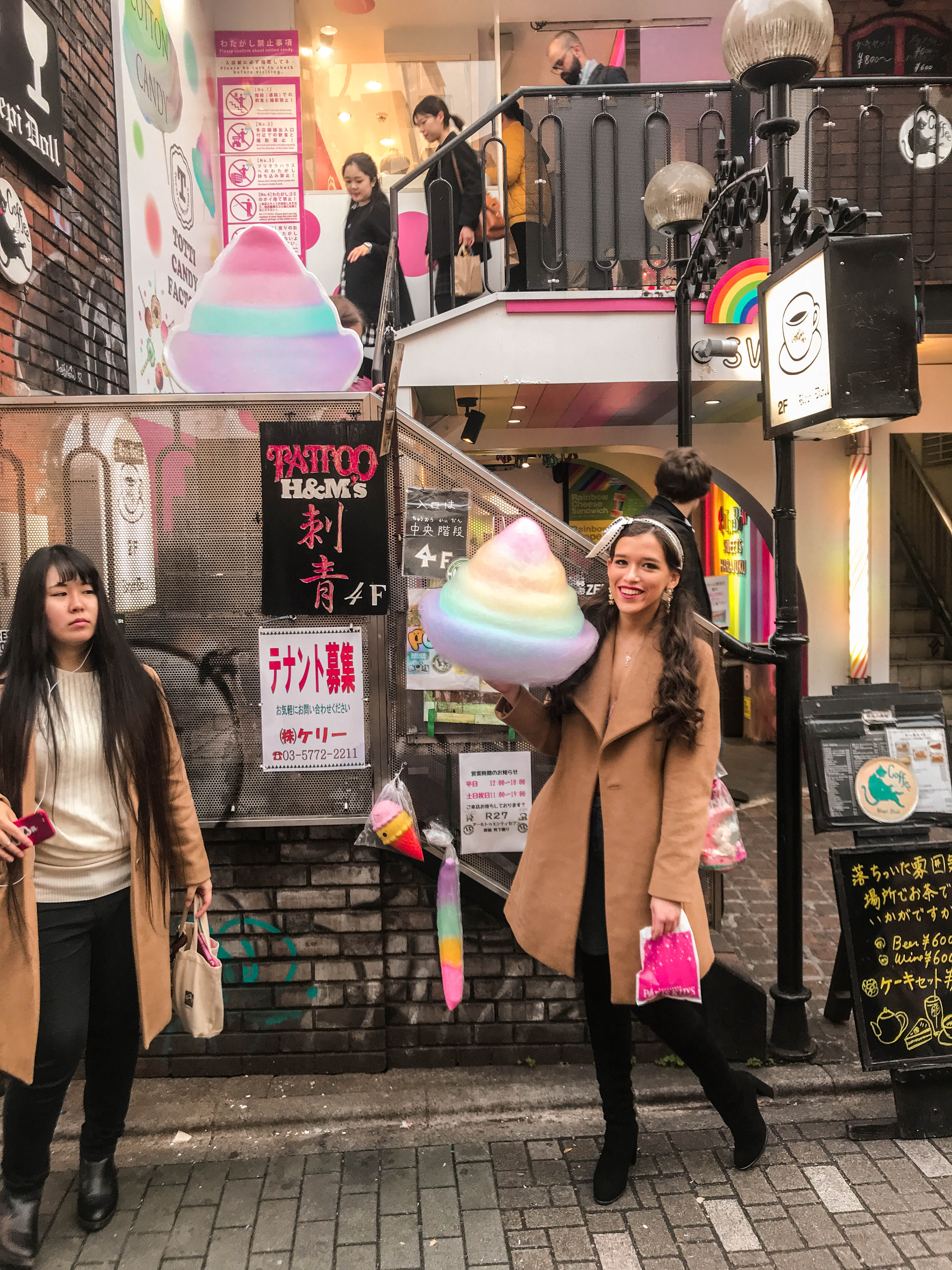 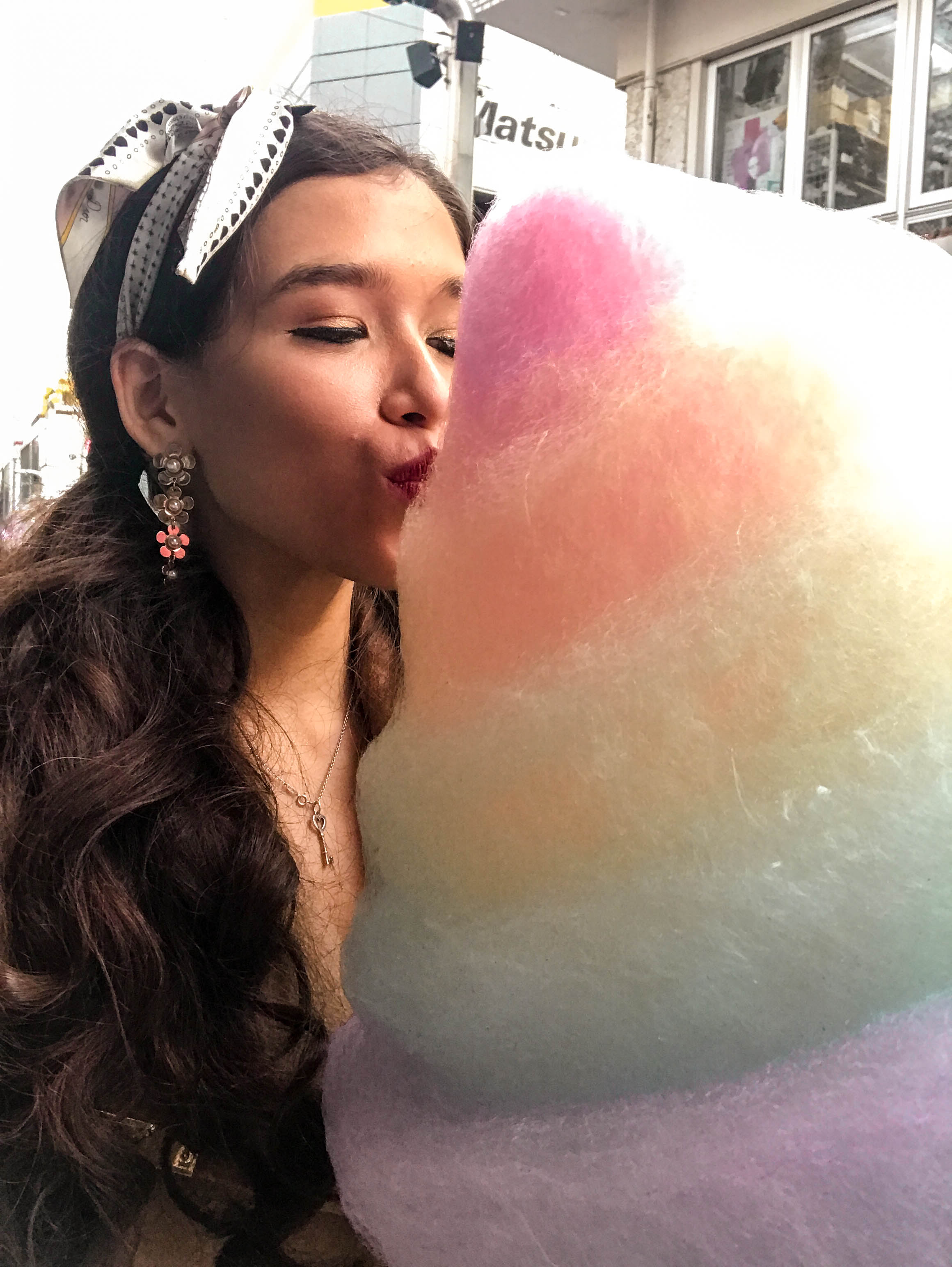 RECENTLY IN MY CLOSET

Enjoy this post? Pin one of the images below to save it as travel inspiration for later! 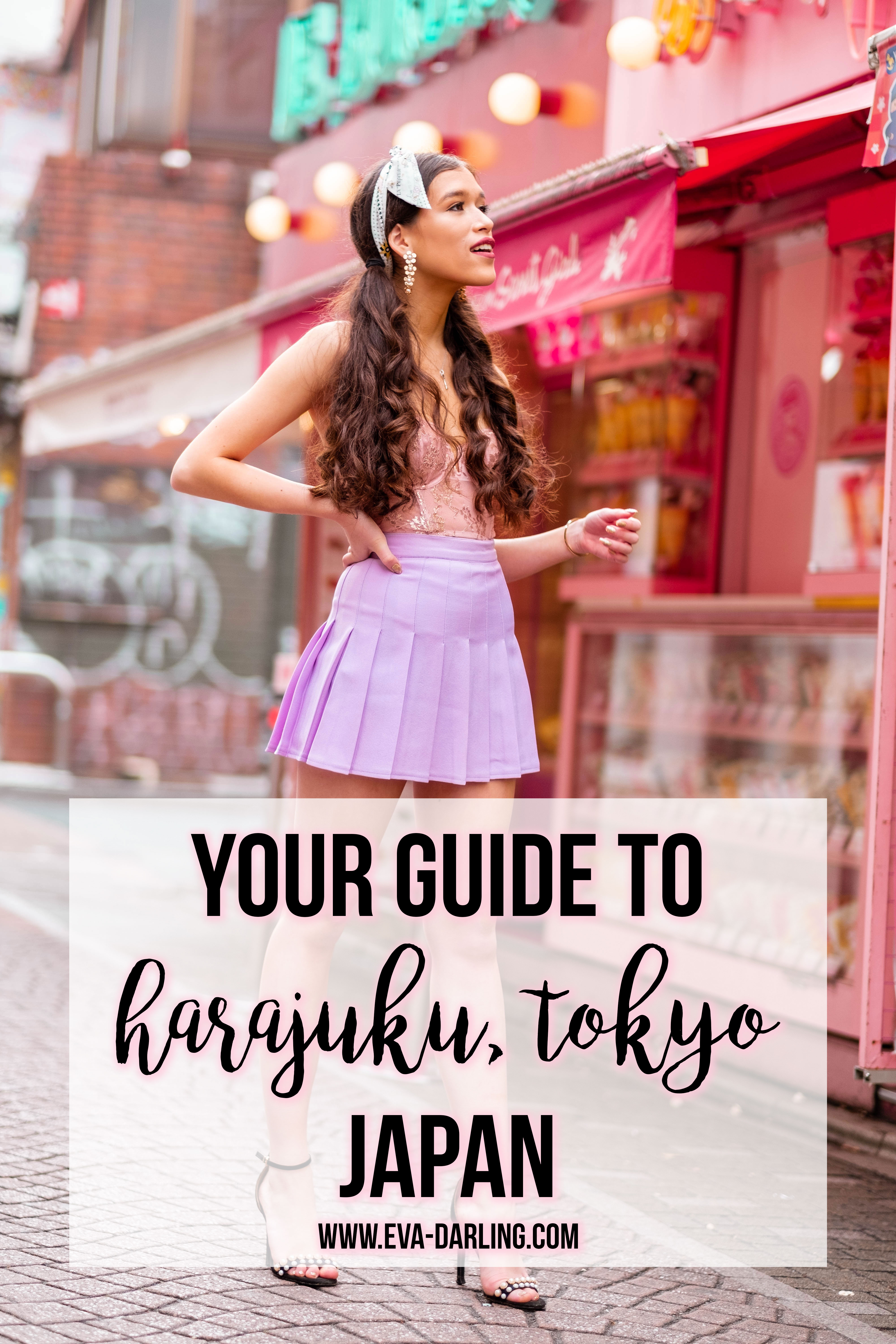